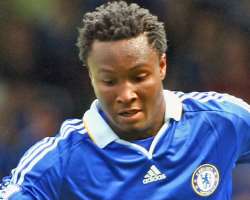 Super Eagles midfielder John Obi Mikel admits he is frustrated to find himself on the fringes of the Chelsea first-team, but realises that the club's search for collective team success is more important than personal gain.

The 24-year-old midfielder is the latest Blues star to have been overlooked by Portuguese tactician Andre Villas-Boas, following the likes of Frank Lampard and Fernando Torres, who have also been forced to settle for a place on the bench in

Mikel Obi
recent weeks.
'It has been hard, but the most important thing is that the team keep doing well,' confirmed Mikel. 'As much as I want to play, the team come first.'

Mikel has lost his holding midfield place in the Chelsea side to summer signing Oriol Romeu following the club's 2-1 loss to Liverpool at Stamford Bridge.

The former Barcelona man was Villas-Boas' first signing as Blues boss, and is highly regarded by everyone in west London. Romeu has impressed when called into the first-team as he looks to cement his place in the starting line-up.

'If the team keep winning, then I shouldn't complain,' Mikel continued. 'Any time I am called upon, I just want to help the team win.'