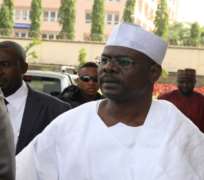 ABUJA, December 19, (THEWILL) – Senator Mohammed Ali Ndume, a serving senator arraigned on charges bordering on terrorism was Monday admitted to bail in the sum of N25 million naira ($155, 000) by a Federal High Court Abuja presided over by Justice Gabriel Kolawole.

Ndume of the ruling Peoples Democratic Party (PDP) who was detained by the state security service more than two weeks is accused of leaking classified information to a terrorist group and facilitating the operations of a member of the Nigerian Taliban known as the Jama’atu Ahlis Sunnah Lidda’awati Wal Jihad, locally called Boko Haram (meaning Western education is a sin).

The court also ordered the embattled senator to provide two sureties in like sum, adding that one of the sureties must be a national officer of the PDP or a former and serving member of congress.

The second surety the court ordered must be a resident Nigerian with a real estate asset in the country valued at more than N50 million. A licensed real estate evaluator’s report confirming the value of the property must be part of the bail documentation to be filed with the Deputy Chief Registrar (DCR) of the Court. The sureties were also ordered to submit current and valid tax papers.

Ndume was also ordered to deposit his travel documents with the court as well as two recent passport photographs with a handwritten undertaking that he would not tamper with evidence or make contact nor interact with prosecution witnesses.

Justice Kolawole further noted that his travel documents could be released to him to travel abroad only if the reasons were deemed important.

Ndume was however remanded in Kuje Prison pending the perfection of his bail.

Further hearing in the suit was adjourned to February 02, 2012.