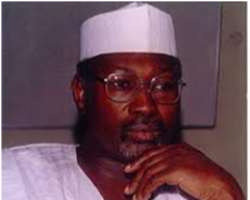 Huhuonline.com / can authoritatively report that three officials of the Independent National Electoral Commission (INEC) were on Monday arraigned before a Federal High Court in Benin City for alleged monetary inducement to sabotage elections.

The three officials alleged to have received bribes of varying forms include the INEC Head of Operations in Edo State, Chinedu Nwankwo (46), Henry Anozie (38) and Obiorah Enebeli (32).

The accused persons were alleged to have falsified ballot papers brought before the Election Petition Tribunal in the petition filed by Charity Amanyanevbo of the Peoples Democratic Party (PDP) against the election of Isaac Osahon of the Action Congress of Nigeria.

Two of the accused persons, Enebeli and Anozie were however granted bail in the sum of N600, 000 each and ordered to produce two sureties each with the evidence of landed property ownership in Edo state.

According to the prosecution, 'the trio allegedly received N2m from one Ted Edwards, counsel to INEC at the Edo State Election Petition Tribunal to falsify documents used during the April 9, National Assembly Election, in Ovia Federal Constituency.' Meanwhile, Nwankwo was not present in court when the charge was read as the police said he was hospitalized while another INEC official, Edwards was said to be on the run.

The charges reads in parts: 'That Chinedu Nwankwo and Henry Anozie being public officers and Head of Operations at the Independent National Electoral Commission, Edo State and one other now at large at the same place, time and date, within the Federal High Court jurisdiction jointly received the sum of two million naira from one Barr. Ted Edward Iseghohi 'm' now at large with a view to corrupt or (effect) improper interference with the due administration of justice and thereby committed an offence punishable under section 124 (c) of the Electoral Act as amended laws of the Federation of Nigeria 2010.'

The accused persons pleaded not guilty before the trial judge, Justice Adamu Hobon, granted them bail in the sum of six hundred thousand naira and two sureties in like sum who must be resident within the jurisdiction of the court. Justice Hobon adjourned the case to March 15, 2012 for trial.