NOTHING CAN BE BIGGER THAN USA '94 FOR ME -OKOCHA 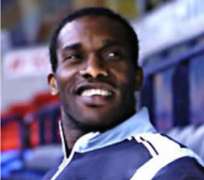 Super Eagles' former mercurial midfielder, Austin Okocha, says Nigeria's qualification for the 1994 World Cup in the United States of America (USA) remains a memory he will take to his grave.

'Nigeria's qualification for the 1994 World Cup will remain memorable for me. In my entire football career, there was nothing to compare to that first World Cup outing at USA '94. I don't think anything can be bigger than that,' observed the former PSG of France midfielder.

Speaking at the MTN Football Hub at Oriental Hotel in Lekki, Lagos at the weekend, Okocha, who was a special guest at the event, recalled his outing with nostalgia.

'It was Nigeria's first time at the World Cup and we were lucky to be the one that made that feat possible. We did our best to ensure that we were not disgraced,' stressed the talented former footballer.

At USA '94, Nigeria made it to the second round and was just two minutes away from a quarter final berth when a rash defensive blunder gave Italy the ticket at Eagles' expense. Nigeria was rated fifth best team leading to that World Cup.

But speaking after watching Arsenal beat Everton 1-0 through a Robin van Persie goal on Saturday evening at the MTN Hub, Okocha insisted that poor planning and the snubbing of grassroots football had been largely responsible for the country's reversal of football fortunes.

'When you fail to plan, it is the beginning of failure. We abandoned our grassroots football and begin to run the game like fire brigade service.

Countries that have done great in the game don't run their football like that. Similarly, every Nigerian is an expert in the game and will not allow the coaches do their work.

'It is sad that at this time of our football, we are talking about bringing back Yakubu (Aiyegbeni) to the Super Eagles when we should be looking for fresh faces to take our game to the next level,' observed the ex international, whose position since retirement has not been adequately filled in the Eagles.

He insisted that the onus on whether the Blackburn Rovers player should return to Eagles rests squarely on Stephen Keshi's shoulders.

'I don't know if it is a risk but the final decision rests with the chief coach of the team. No doubt, Yakubu is having a good time in the EPL now, scoring regularly for Blackburn. But if you ask my opinion on the matter, I will say that it is better for a coach to fail with fresh players than with recalled ones.

With new ones, everyone will know that the coach is building a new team and the blame will not be much even if such an experiment did not work out,' reasoned Okocha, who took time out to show fans the stuff he is made of, juggling the ball even with his shoes on.

At the end of the event, some of the fans, who were adjudged the best supporters of some of the EPL teams, were rewarded with gift items such as MTN branded track suits, footballs and face towels. The next edition of the MTN Football Hub has been scheduled for early January at same venue.

Super Eagles head coach, Stephen Keshi was the pioneer guest at the hub introduced by the telecommunications giants, MTN as a way of creating a convivial atmosphere for upwardly mobile football buffs to enjoy the most popular league in an environment with stadium feelings.