Nollywood: On a Wing and a Prayer 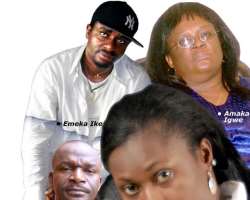 Governor Ikedi Ohakim of Imo State, on a visit to THISDAY recently, spoke glowingly about Nollywood – Nigeria's movie industry. “Over 80 per cent of the actors and actresses are from Imo State,” he announced, with a sense of pride. You may doubt his statistic – I think 80 per cent is on the high side – but I am always heartened when a politician lifts up the banner of Nigeria's culture industry as an indication of what we have and what we can do. For once, we are not discussing just oil or banking or telecoms. We are gradually accepting new realities – that entertainment and the arts are something we can also be proud of. My first contact with Indian culture was the Indian films – “Burning Train” and “Promise”, among others. My first contact with the Chinese revolved not just around tea cups and aluminium pans but also around Bruce Lee and “Enter the Dragon” and so forth.

I know very much that Nollywood is behind in terms of the quality and the content of production. Only a handful of our movies can come anywhere near the quality churned out from America's Hollywood and India's Bollywood. There is no need to dribble around that. I am often confounded by the storyline, especially the sickening coincidences that you watch from movie to movie – you know the stupid stuff of a guy wanting to marry a girl only to discover at the end of the story that she is his twin sister, all that crap. This plot is repeated in different forms from movie to movie. I am also disturbed by a change of scene to “two years later” and the actor is still wearing the same dress. I have serious problems with the depth of thinking that goes into many movies and the obsession with the supernatural, especially when a simple love story can make a most gripping play. I can detain us here with a long story of why Nollywood is trash.

But, let's be real, our times are in constant evolution. There is a world of difference between the pioneering “Living in Bondage” produced by Franka Nwusulor in 1992 and “Irapada” produced in 2007 by Kunle Afolayan. Technology has improved, budget is bigger, standards have gone up and the audience is far, far bigger and wider. Virtually every producer now knows that he has to up his game. The women will eventually be separated from the girls. Quality control is certainly better than it used to be. If you ask me, the only direction we can go is forward. One of the most successful channels on DStv is Africa Magic, which screens mostly Nigerian movies day and night. Our artistes are celebrated all over Africa, and beyond. Aki and Paw Paw are international icons. Rita Dominic recently stole the limelight right from former Ghanaian president, John Kuffour, at a major event in Malawi. Yet, all that many of us can see are the negatives. We seem to have decided that nothing good can come out of anything Nigerian.

We are dealing with a multi-billion dollar industry capable of employing millions. How many Nigerians can the government employ and keep happy? How many can the banks have on their payrolls? How many can the oil companies engage in meaningful employment? Ultimately, an advanced economy runs and prospers mainly on self-employment, both small-scale and medium-scale business. The movie industry has the capacity to create formidable employers of labour and income-earners in the country – think of the actors and actresses, the producers, the stage hands, the CD makers, the printers, the distributors, the vendors. Think of the auxiliary income accruing to those who participate in production directly or indirectly – hire of cameras, purchase of props, truck hire, payments to use certain buildings for shoots, and a host of other items that can feed people day in day out. Therefore, if there is a state policy to consciously harness and harvest the entertainment industry through culture-friendly incentives and initiatives, we are looking at a very big industry whose potentials are yet largely untouched. Abba's music was a major Swedish export. Bob Marley's music, and reggae generally, is a key component of the Jamaican economy.

All said and done, I am of the opinion that we are not doing enough to promote and project the Nigerian culture industry – movies, music, literary arts and the rest. To think that the music industry loses as much as $1 billion yearly to piracy is mind-blowing. There is not enough institutional support for the industry. Whatever we count as achievement today owes largely to the Nigerian spirit – that never-say-die spirit that thrives in spite of troubles and challenges. Fill the roads with potholes and the Nigerian will invent a chemical to protect his tyres from bursting. Deny him public water and he will sink a borehole in his backyard to wash, cook and bathe. Never say die. This is the spirit that drives us in Nigeria. That is the spirit at play in the culture industry.

Therefore, before we complain to death on the poor quality of our output, we should spare a thought for the challenges these guys are facing. Funding is a major one. The movie industry was started and is sustained by the sheer determination of Nigerians. While government officials get budgetary allocations in billions purportedly to serve the industry, the money ends up in private pockets as estacodes and travelling expenses to foreign festivals and conferences. We will rather pour money to patronise foreigners while neglecting our creative products and events. Yet for decades, the culture industry has done more than any sector to promote Nigeria's image, from Chinua Achebe's Things Fall Apart, to Wole Soyinka's Nobel prize, to Chimamanda's fairy tale adventure. They continue to get international recognition.

UNESCO recently rated our movie industry the second largest in the world, prompting the World Bank to commit $20 million as intervention fund to develop the industry and fund creative projects. How is the money being spent? How beneficial is the loan to Nigerian practitioners? What we are hearing now is that the money will be spent on things like shooting a documentary to be shown on Oprah Winfrey, hiring foreign consultants and such like. Eventually, Nigeria will be indebted to the World Bank without much benefit to the industry that the grant was meant for in the first place.

Piracy and distribution remain big issues. In the last two years, no serious work has been going on in Nollywood. Producers are re-releasing old films in new jackets because of funding issues. Banks are not giving credit because there is no authentic market information to show how loans will be recouped. Meanwhile, National Films and Censors Board (NFCB) has increased censorship fees from N20,000 to N50,000 when the industry is operating at its lowest ebb. A lot of entertainment events are crying out for sponsorship, but it would appear government and corporate bodies are only interested in splashing millions of dollars on CNN and foreign events around the world. But events such as Tony Okoroji's Nigeria Music Awards, Tajudeen Adepetu's Nigeria Music Videos Awards, Peace Anyiam-Osigwe's African Movie Academy Awards, Amaka Igwe's BOBTV, Abuja Film Festival, ZUMA film festivals and other Nigeria cultural events continue to struggle to get sponsors year in year out.

I have a strong feeling that one day, we would realise we are making a mistake by not providing institutional, moral and financial support for our own while splashing millions of dollars on things that will only benefit foreign economies. Our culture industry is endangered because it lacks enough support. We will find it very difficult to enter the next level and compete very favourable with the best in the world if this attitude does not change.