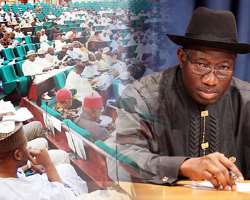 ABUJA, December 7, (THEWILL) - The House of Representatives Wednesday cut President Goodluck Jonathan's virement proposal to the tune of N66.5 billion approving only N31.9 billion for some federal government’s Ministries, Departments and Agencies (MDA’s) in the 2011 Appropriation Act as against the sum of N98.4 billion earlier requested by the President.

President Jonathan’s had in his letter of request for approval asked for N997, 774,133 million for the Federal Road Safety Commission (FRSC) and N11, 507,716,042 for Police Formations and Command.

The President also requested for N33 billion for the Niger Delta Ministry.

In approving the virement, which is a process of moving allocated funds from ‘less important’ project heads, or subheads to more critical ones, the House also approved the extension of the 2011 budget lifespan to March 31, 2012. The 2011 Appropriation Act initially had December 31, 2011 as its end date.

Chairman of the House Committee on Appropriations, Hon. John Enoh while defending the decision to cut down the virement said the committee’s analysis revealed that recurrent expenditure items “were transferred between ministries and agencies, contrary to clause four of the 2011 Appropriation Act.”

He said the committee’s recommendations said the extension was necessary to enable the affected MDAs implement the capital projects for which the funds were being moved.

The said clause reads inter alia; “In the event that a need arise to vire amounts within the heads of expenditure to which sums have been appropriated under this Act, such virement shall only be effected with the prior approval of the National Assembly.”

The chairman argued that the intendment of the legislature was that virement should be carried out within MDAs, “and not the transfer of funds from one ministry to another which amount to alteration of the 2011 Appropriation Act if it is approved,” pointing out that being already at the end of the year, the requested funds must have been accessed by the concerned MDAs.