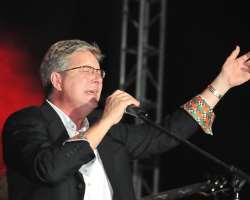 AMERICAN ACE GOSPEL SINGER, DON MOEN PERFORMING DURING THE GOSPEL NIGHT AT THE ONGOING 32 DAYS CALABAR FESTIVAL HOSTED BY THE CROSS RIVER STATE GOVERNMENT AT THE J U ESUENE, CALABAR.
Listen to article

CALABAR, December 6, (THEWILL) - The Government of Cross River State has expressed deep appreciation to all Cross Riverians for their patience, concern, prayers, and understanding throughout the period of impasse over the implementation of the N18, 000 nationally approved minimum wage for workers both in the State and Local Government services.

Labour downed tools for about 5 weekdays ending last week following disagreements with government over the continued implementation of the new wage.

Government in a statement said the action of Cross Riverians shows deep faith in the leadership of the executive governor of the state, Senator Liyel Imoke.

Government also thanked and commended Royal fathers in the state’s Council of Chiefs, the State’s Elders Forum, the leadership and honourable members of the Cross River State legislature for the role they played that led to the suspension of the strike by labour.

Government also commended the leadership of labour for their patriotism and understanding in suspending the strike action, saying it remains committed to ensuring that civil servants in Cross River are paid appropriate wages.

“This administration is committed to the actualization of the new Cross River vision as encapsulated in the 7 point Agenda of the administration and the state’s economic blueprint. We will continue with our interventions in the key sectors of education, healthcare delivery, agriculture, youth empowerment and human capacity building among others. We are on course towards the total transformation of Cross River State, a statement from the government said Tuesday.