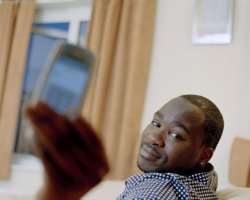 Exquisite platinum & gold suits made with Vicuna, Pasmina & Qiviuk, the finest wools in the world, to launch in Lagos, with the unveiling of the World's Most Expensive Suit

Alexander Amosu – a young but globally-renowned entrepreneur who is responsible for creating the world's most expensive phones, pens, and suit. Amosu, 34, is an all-round businessman who started in business at age 12, and has dipped his hands in diverse industries such as: music, media, fashion, IT and hospitality.

Amongst a string of firsts: he's the first person in Europe to create Urban ringtones; he created the first ringtones book and software (called Polywap 2.1) which allows users send ringtones around the world from a PC; he started the world's first mobile video community site (called Mobsvideo.com) where users can upload and share content.

On April 22, 2009, in Pall Mall, London, he unveiled his latest creation: the world's most expensive suit (made with gold and platinum threads, rare clothes and precious stones) which costs £70,000 (about $103,000). He immediately attracted global headlines, with his fresh luxury line amassing rave reviews from some of the world's biggest media organisations. Next, he's taking orders from some of the world's biggest spenders; hopping on chartered flights to take measurements and ensure client specifications (current clients include Tycoons Duncan Bannatyne and James Caan; as well as Formular One driver Adrian Sutil).

Next, he secures a place in the Guinness Book of World records!

Now, with a pouch full of achievements, and a resume packed with accolades, Mr. Amosu is heading to his motherland, to reconnect with family, friends and clients, while hoping to introduce his range of offerings to select patrons. The respected entrepreneur has partnered MTN Nigeria to Launch the world's most expensive suit, at a secret location in Lagos, Nigeria on December 5, 2009.

Apart from London and Lagos, the world's most expensive suit will also be launched in New York and Abu Dhabi.
Amosu's success story, his devotion to charity, and infectious can-do spirit is expected to influence millions of Nigerian youths, hoping to discover themselves and use innate skills and abilities to triumph over the difficult Nigerian situation.