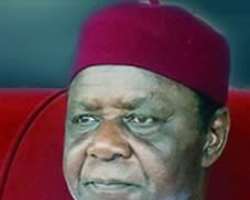 •Ralph Uwechue
Love him or hate him, Ambasador Ralph Uwechue, the President General of Ohaneze Ndi Igbo an apex social cultural group of Igbo extraction is a man who stands by his word. His role during the election of President Goodluck Jonathan elicited many controversies among Igbo race who questioned his interest in electing a man from the South South geopolitical zone of the country instead of supporting the emergence of Igbo man as the President of Nigeria.

In this report, EMMANUEL UZOR writes on the true situation of things among Ndi Igbo including the recent marriage between South East and South South ahead of 2015.

The true position
As the head of Ohaneze Ndigbo, the overall caretaker of Igbo interests worldwide, I am taking the opportunity of the solemnity of this occasion, firstly to nip in the bud, incipient but potentially dangerously divisive controversy involving some political highly placed Igbos vis-a vis the position of Igbo nation on the vexed question of South East Presidency.

The stand of the Igbo nation on the issue of South-East Presidency was made abundantly clear in the statement issued by Ohaneze Ndigbo on 15th October 2010, titled presidential election and zoning which stressed inter allia as follows. Ohaneze Ndigbo firmly believes in the reality and absolute equality of the six geo political zones and strongly holds the view that the topmost executive office in the land-Prime Minister or President which has eluded the two geo political zones of South East and South-South since the birth of our nation half a century ago should now go to them in turn of unbroken succession as a mater of national priority, before any other zone can justly claim the right to second or even third turn

Why Ndigbo voted President Jonathan
This said it all, the overwhelming Igbo support at the elections last April, was for a hitherto politically deprived South-South zone, with President Goodluck Jonathan, already on seat, as its providential pre-positioned flag bearer. On an issue of such national importance and of special interest to Ndigbo as securing the presidency for the South-East, the Igbo nation expects its politically active sons and daughters, no matter how highly placed to respect and comply with its clearly defined goal, as set out in that statement endorsed by Ohaneze Imeobi and approved by the General Assembly, which met at Enugu on 30th October 2010 and 6th November 2010 respectively.

Ethnic plurality
Nigeria , with over 300 ethnic and sub ethnic units, brought together by the force of British Imperialism to forge a modern nation, is still in the process of nation building, struggling to blend together and harmonize the various very rich but differing traditions, customs and cultures of people. The recognition of the significance of ethnicity was clear at the birth of an Independent Nigeria in 1960. The larger ethnic units of Hausa/Fulani-Igbo-Yoruba formed the basis of the three regions North-East-West. The conception of the six geopolitical zones is also based, with three zones accorded to the larger ethnic groups, to balance term out, three also to be conglomerate of the smaller ethnic units.

The lesson from this structural arrangement is that the ethnic units are recognized and acceptable as veritable building blocks in the on going construction work and nation building process in Nigeria . So in our socio-political economic intercourse, all geo political groups big or small must be allowed free play and equitable access to our country's resources and strategic political command posts, including particularly the presidency. Sustained imbalance in sharing responsibilities and the 'national cake' could conceivably induce those units aggrieved a re-think of the value to them of much vaunted national unity.

The marginalization of Ndigbo
Today, there is a general feeling within the Igbo nation especially among the young up-coming generation, that as a people, Ndigbo are being deliberately sidelined particularly in the sphere of political leadership of the country. No Igbo person has so far been deemed suitable to be put at the helm of affairs, at the apex management position of Nigeria since Independence in 1960. Dr. Nnamdi Azikiwe, Nigeria 's pioneer titular head of state, took a shot at the real thing-the executive presidency, in 1979 and in 1983. In spite of this nationally acknowledged role as the foremost crusader for our nation's Independence, he scored abysmally in both electoral tests. Dr. Alex Ekwueme fared no better, even as he teamed up with a scion of Northern Oligarchy- Alhaji Shehu Shagari. Their joint ticket under the National Party of Nigeria, (NPN) won presidential slot in the successive elections of 1979 and 1983.

Somewhat like today Peoples Democratic Party, PDP, the National Party of Nigeria NPN was the dominant party at the time. Securing its presidential candidate's nomination was as good as clinching presidential position. Dr. Ekwueme was poised to replace Shagari at the impending end of his second tenure as the party's presidential flag bearer come next election. He was eminently qualified and was clearly favoured by Shagari himself for the presidential job ahead. He had to be stopped, hence the coup of 31st December 1983 carried out by a tiny crop of ambitious anti-Igbo and anti-Shagari military elements.

This event denied Ndigbo, perhaps the largest ethnic group in Nigeria , their federal character chance of producing an executive president and their constitutional right to exercise presidential powers for a possible eight year period of two terms. The callous and contemptuous treatment meted out to Ndigbo is in clear contrast with the compassionate concession, massively supported by Ndigbo, given to Yoruba South-West in 1999 to field the two Olus-Obasanjo and Falae, from three different political parties, the (PDP) and joint ticket of All Peoples Party, (APP) and Alliance for Democracy, (AD) respectively for the universally acknowledged South-West presidential slot missed by their kinsman, Chief M.K.O Abiola in 1993.