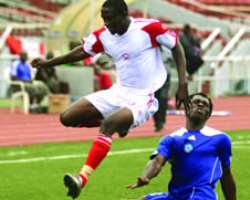 After an impressive semi-final finish in the CAF Confederation Cup, even as debutantes in the continental soccer scene, Sunshine Stars Football Club is leaving no stone unturned towards ensure a successful campaign in next year's CAF Champions League.

The Akure-based side, which earned a ticket to play in the continent's biggest club competition after finishing as runner-up behind champion, Dolphins of Port Harcourt in the recently concluded season, has signed on Al-Ittihad of Libya Nigerian-born stormy striker, Izu Azuka, to boost its attack ahead of the domestic and continental campaigns next year.

Executive Director of Ondo State Football Agency (OSFA), Mike Idoko, who confirmed the development, expressed confidence that the player, who tormented the defenders of his team in this year's CAF Confederation Cup as well as Enyimba's defenders in this year's CAF Champions League, would add quality to Sunshine's attack.

'We are delighted to have a quality player like Izu Azuka. He was actually the target of many clubs, including Enyimba and Heartland. I am confident that he will add quality to our attack especially in our campaign at the CAF Champions League,' Idoko said.

The former Warri Wolves' general manager further revealed that his team still has its radar on Cameroon's junior international, Kevin Agbor, who missed signing for the club narrowly last season.

'We still have Kevin Agbor on our radar. All things being equal, he would join us in the new season. We have also recruited a couple of quality players from other Premier League clubs in Nigeria.

'We want to make another impression in the CAF Champions League next year like we did in the Confederation Cup this season,' Idoko enthused.