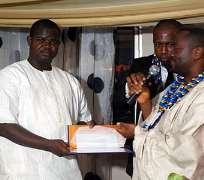 ABUJA, November 25, (THEWILL) - Former Special Adviser on Media and Publicity to President Jonathan, Mr. Ima Niboro, was in limelight last weekend with his investiture as a Paul Harris Fellow (PHF) of the Rotary Club of Apo.

At the Investiture ceremony which held at the banquet hall of the Savannah Suites Area 3, Abuja, President of the Rotary Club of Apo, Abuja, Rotarian Arinze Unachukwu, said Niboro was nominated for his resourcefulness in service to the nation and humanity.

In the citation, Arinze noted, “Niboro stands tall in Nigeria today among the top echelons of the media profession, having risen through the ranks to its zenith. Highly respected by friends and colleagues in the profession as an accomplished image maker and dogged defender of democratic values, it is on record that Niboro served diligently and brilliantly as Presidential Spokesman during one of the most trying phases of the nation’s political history.”

The Paul Harris Fellow award is usually bestowed on outstanding donors by the Rotary International towards its humanitarian activities.

In a brief remark, Niboro thanked the club for award noting that he remains committed to the service of fatherland and humanity.

It will be recalled that former presidential spokesman had got the club’s Vocational Service Award in recognition of immense contribution to community development in 2010.