Boateng's Masterpiece Unlikely To Be Appreciated In Ghana 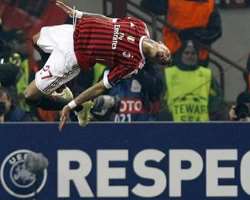 AC MILAN'S KEVIN-PRINCE BOATENG CELEBRATES AFTER SCORING A SECOND GOAL AGAINST BARCELONA DURING THEIR CHAMPIONS LEAGUE SOCCER MATCH AT THE SAN SIRO STADIUM IN MILAN NOVEMBER 23, 2011.
Listen to article

Kevin-Prince Boateng may have rubbed salt into Ghanaian wounds by scoring one of the best goals of the Champions League season in AC Milan's 3-2 home defeat by Barcelona.

The heavily-tattooed midfielder quit the Black Stars this month at the age of 24, the latest controversy involving the player widely remembered for the incident which forced Germany's Michael Ballack out of the 2010 World Cup.

German-born Boateng, raised in one of Berlin's toughest neighbourhoods, has enjoyed some spectacular moments in his second season with the Italian champions.

He scored in the Supercup win over Inter Milan in August and then struck a magnificent long-range goal in the Champions League win over BATE Borisov.

That was followed by a 14-minute hat-trick immediately after he came on as a halftime substitute in a Serie A match at Lecce. Trailing 3-0, Milan bounced back to win 4-3.

On Wednesday, the player who models himself on Pele and Rivaldo produced a goal either Brazilian would have been proud of against Lionel Messi's Barca.

Collecting a pass from Zlatan Ibrahimovic at an awkward height, the former Tottenham Hotspur, Borussia Dortmund and Portsmouth player flicked the ball through a defender's legs and fired a low shot between Victor Valdes and the near post.

NATIONS CUP
For Ghana it was an untimely reminder of what they will be missing at the African Nations Cup in January.

The Ghana FA said Boateng had told the association that playing for club and country was too much.

"According to Kevin the physical demands of playing for club and country at high levels are taking a toll on his health," it said.

"The player also explained that in order to remain healthy and stave off injuries he has consulted his doctors and family over the matter and has decided to take the decision to excuse himself from national duties."

The decision caused an angry reaction in the West African nation and led to a discussion over the use of foreign-based players, especially those raised in other countries but qualified to play through their parents.

Some commentators said Ghana had become over-dependant on foreign-based players who often chose to play for the country when they were unable to win a place in other national teams.

Others said Boateng won his transfer to Milan on the back of his excellent performances for Ghana at the World Cup when the Black Stars reached the quarter-finals.

"All one has to do these days is to be a Ghanaian of foreign descent, request to switch nationality and you are guaranteed an automatic first team place in the Black Stars," said one columnist.

"He played a few games, performed admirably and now his career is steadily rising he realises it is time to pack up his bags and bid goodbye to Ghana.

"I hope he wins the African Player of the Year award for no other reason than to see the reactions of Ghanaian football fans."