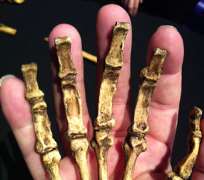 It is currently the hottest topic in palaeoanthropology, and visitors to London's Natural History Museum can now get to see what all the fuss is about.

The institution has just taken delivery of casts of Australopithecus sediba.

This 1.9-million-year-old creature caused a sensation when the discovery of its fossil remains in South Africa was first announced in 2010.

A. sediba has a curious mix of ape and human features, suggesting it could be one of our direct ancestors.

“This is one of the most exciting and controversial fossil finds of recent years and it's fantastic to have this material at the museum,” said Prof Ian Owens, the NHM's director of science.

“Researchers will get to work with it, but also the public will get to see it, and we hope that will really help bring the science alive,” he told BBC News.

The replicas are a gift from the government of the Republic of South Africa and the University of the Witwatersrand, which is leading the investigation into the fossils.

The real specimens were found at Malapa in the famous Cradle of Humankind World Heritage Site, just to the northwest of Johannesburg.

Continue reading the main story
They were pulled from a pit – a depression left in the ground by a cave complex that lost its roof through erosion.

Identified as the remains of an adult female and a juvenile male, the two individuals were quite possibly mother and son.

It seems they died together in some tragic accident that saw them either fall into the cave complex or become stuck in it. After death, their bodies were washed into a pool and cemented in time along with the skeletons of many other animals – sabre-tooth cats, hyenas, antelope, even birds and mice.

“All of this accumulation happened very, very quickly – in a few days, weeks or months,” said lead researcher Prof Lee Berger of the Institute for Human Evolution at Wits University.

“Once we've completed this project, we're going to be able to show a texture of a moment in time that we have never seen before except in maybe the eruption of Mount Vesuvius and the burial of Pompeii.”

Scientists are now engaged in an intense debate over the status of A. sediba in the story of our origins.

Prof Berger and his colleagues say the creature's mix of ancient and modern traits probably makes it central to that story. They propose that A. sediba could even sit on, or very close to, the line that led directly to us – modern humans (Homo sapiens).

Other scientists remain to be convinced, and argue too little is known about the diversity of ancient human forms this far back in time to make any bold statements.

What is not in doubt is the remarkable preservation of the fossils, which includes a stunning articulated hand.

The hand of a female with nearly all its bones
In something of a coup for the NHM, the replicas have copies of bones not yet described in the scientific literature – a knee bone, vertebrae, and fragments of lower jaw from the female.

So good was the process of fossilisation at Malapa that more finds are sure to follow. It is expected that many of the parts missing from the existing skeletons will be unearthed at some point, along with the bones of other A. sediba individuals.

There are also some tantalising possibilities to come from the items already in the possession of the scientists. The most intrigue surrounds what could be the remains of soft tissue – something that would be a major surprise in fossils this old.

The Wits team is unsure how to investigate such special material and has appealed to the wider scientific community to recommend the most appropriate techniques.

“We've started an open access science experiment; we're trying to identify whether material that we find in direct association with these skeletons and the skeletons of animals is in fact skin,” explained Prof Berger.