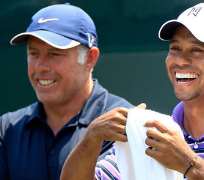 Tiger Woods has been drawn against Adam Scott and former caddie Steve Williams in the opening foursomes in the Presidents Cup.

The seemingly inevitable clash has come about in the first round of matches that sees all 12 players on each side tee it up in the United States v Rest of the World match.

The former world number one axed Williams earlier this year after a partnership lasting more than a decade, while just a fortnight ago the caddie stoked the fire by making racially-motivated remarks at an awards ceremony.

Rest of the World team captain Greg Norman said he had not spoken with counterpart Fred Couples and his assistants about it and denied the pairing was premeditated - but said he had consulted Scott and Choi about it.

"I think it's great for the tournament. It needed to be done. It played out the way it played out," he told reporters at Royal Melbourne Golf Club.

"I just think that in the situation and the best spirit of the competition for the tournament there's obviously a lot of speculation and intensity from the people in this room here that it could take place.

"We talked about it as the three of us and say, 'okay, if we had to diffuse anything and just get this thing over and done with, wouldn't you rather have it sooner than later?'

"Because I personally wouldn't have wanted to be sitting down at the singles and everybody is playing a really tight match and it comes down to the last group or the second to last group, and all of this pressure is coming on because it's the first time the two met."

Ishikawa late
The match gets underway on Thursday morning with American pairing Bubba Watson and Webb Simpson taking on the old-and-new pairing of Ernie Els and Ryo Ishikawa.

The 20-year-old Japanese star arrived late on Tuesday, well after his team mates and has little time to get to know the challenging lay-out.

"Well, I think that had a lot to do with it," said Norman. "We knew Ryo got in late and only had one practice round. They are out there playing now.

"Ernie shot 60 around this golf course so he knows how to play Royal Melbourne," he added of the South African, the only player on the team to have tasted victory in the Cup back in 1998.

Norman picked a trio of Australians in the following three pairings, in part, he said to get the local crowd firing early.