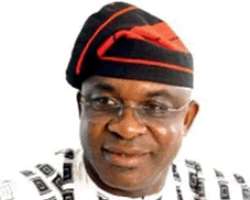 David Mark
But for the Senate President David Mark's intervention yesterday, lawmakers in the Upper Legislative Chamber would have served President Goodluck Jonathan a 'no confidence' vote. The Senators especially from the opposition parties were angry that the Presidency was not doing enough to stop growing insecurity especially its alleged inability to have answers to the Boko Haram menace.

The Islamist sect unleashed terror on Damaturu and Potiskum in Yobe State on Sallah weekend, November 4 and 5, killing over 150 people.

Behind closed doors in the National Assembly, Abuja yesterday, the angry Senators had harsh words for the President and his security chiefs over alleged failure to tame the Boko Haram members.

Sources present in the closed-door session noted that the anger against the President and his service chiefs started with scathing comments from members of the opposition parties and at a point, some even called for the passage of a vote of 'no confidence' on Jonathan.

'The Senate President quickly intervened on behalf of Jonathan and explained that should the chamber go ahead with the vote of no confidence that could be misconstrued to be an impeachment move from the Senate.

'At the end, reason prevailed and it was resolved that the Committees on Police Affairs, Security and National Intelligence, Defence and Army, Air Force, Navy and Interior meet with security chiefs on the matter, ' the sources said

Daily Sun investigations revealed that at the end of the plenary yesterday, the service chiefs responded to the summons and held a meeting in the office of a ranking Senator on the Fourth Floor of the Senate New Wing.

Should that meeting fail to yield the desired result, 'another meeting,' sources told Daily Sun, 'would be convened in the Presidential Villa.'

The expanded meeting, it was learnt, would also discuss details concerning the 2012 Budget.

Opening the session, Mark announced that 'the Senate in closed-door session discussed matters of national importance affecting national security and other general issues.'

Regardless, Senate spokesman, Enyinnaya Abaribe, told newsmen at the end of the session that the chamber reviewed the present security situation in the country and has resolved to continue to dialogue with security chiefs.

Senator Abaribe pleaded with Nigerians to give the security agencies more time to tackle the matter.

'There was an executive session that was mainly concerned with the matters of national security. All of us are aware of the situation of things today in Nigeria and we want to also let you know that the National Assembly will continue to engage with the executive with regards to national security and I think the discussion is on-going to ensure that each and every one of us lives in Nigeria that is free from the current problem that we are undergoing and we hope that every Nigerian will be more concerned about our security and that is exactly what we are doing.

'On the kind of manual security measures in place presently, you will recall that not too long ago, we had an executive interaction with all the various heads of security organisations in Nigeria and this discussion had been on-going and part of what we did today at the executive session was a review of all these measures that are being taken.

'I think also that there is an on-going review which means that the measures will continue to be upgraded and improve with time. We are asking for a little patience and we know that things will get better.

'I think we have been having on-going discussions. The committees will engage with various security agencies and will bring report to us,' he said.