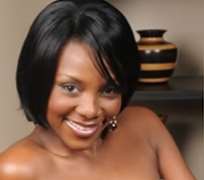 The crash of Monalisa Chindah's marriage with her estranged husband, Segun Dejo-Richards is already having a ripple effect with Dejo's interview in some national newspapers.

Dejo had claimed in an interview that Genevieve Nnaji, Rita Dominic and Mercedes were once living with Monalisa and living off her. This did not go down well with the people mentioned and most of them, except Genevieve are already contemplating lawsuist against him for dragging them into matter that does not concern them.

Genevieve is backing down simply because Monalisa sent her an apology via a text on behalf of her estranged husband.
Speaking to nfc, Genevieve wondered how Dejo would drag her into his 'mess' as the questions directed at him have nothing to do with her. 'First of all, who is this chap and how does he know my name? As the time Lisa and I were friends, she hadn't gone to London. And according to him, that is where they met. In other words, he never knew me and still doesn't know me, so he should know better than to mention my name in their issues. I don't want to say much on this because Monalisa sent me a text today apologizing on his behalf. And I really do understand the cheap publicity stunt he is trying to pull. I will not indulge him further'.

Mercedes, a friend of the trio who claims she hasn't seen or spoken to Monalisa in five years is also angry that her name could be dragged into the matter, considering the fact that their friendship nose dived the day Monalisa and her brother (whom Monalisa was dating at that time) broke up.

Speaking to nfc from Ghana, where she went to for a business deal, Mercedes spoke angrily and only stopped when the reporter's credit ran out on her. 'I can't still understand why this guy would mention my name in his woes. I don't know him and I've never met him before. I don't think I will even recognize him if I pass him on the road, so why should I be an issue in his mess? I never lived with Monalisa. She was dating my brother as at that time and we were all friends, Genny, (Genevieve), Rita, Monalisa and I. So we hanged out together. Sometimes they were in my place at Marwa Gardens, (Ikeja) or Rita's place at Hospital Quarters where she was living with her sister-in-law. We could stay at each other place for days or weeks as most girls do.

So I can't turn around to say Rita or Genny lived with me; that would be a lie. As at that time, Lisa could not even afford to feed me alone not to talk of five people, so how could all of us with family be living off one woman? She and my brother were dating and when their relationship packed up, my relationship with Monalisa did not go on smoothly again. We stopped being friends then. So, how can I have anything to do with their break up? I think this guy is just trying to cause unnecessary trouble. He was not even in the picture when we were friends. The only guy I know with Monalisa, aside my brother that she dated, was a Lebanese guy who rented the Lekki house for her. That guy was also a platonic friend of Rita's. So, this Dejo guy is just talking about things he knows nothing about. He needs to be called to order', she thundered.
Ms Dominic who is holidaying in United States says Dejo Richards must be delusional to say she was living off Monalisa or blocking her from getting roles when she was the one that introduced her to Zik Zulu Okafor and Chico Ejiro.

Responding to our email enquiries, Rita wrote: 'I want to say that I am away on vacation and have not read the interview. But from the little read to me, it seems that Mr. Richards is using the press to expose private conversation he may have had with his wife while they were married. His actions were undignified to say the least and I will not be part of the dirty games. My advice is that he should focus on his family and stop defaming innocent people to sell his story.' On the allegation that she advised Moanlisa not to marry him because Dejo-Richards is from the South West part of Nigeria and that she continued to stand against her marriage, Rita says nothing could be further from the truth. 'The truth is, I don't know this man. I was living and working in Nigeria when he claims to have met Lisa in London. Lisa and I had lost touch so, I was not privy to her relationship with this man. I did not know when they got married; I only found out a few days ago that they are no longer together.'

On whether she lived off Monalisa when they were friends, Dominic reacted that Dejo Richards must be a delusional soul to have said that. 'Mr. Richards must be delusional (for saying I was living off Monalisa). At one time, I moved in with my sister-in-law at General Hospital's Doctors Quarters, Lagos Island. When she moved to England to meet her husband (Rita's brother), Monalisa started staying with me. It was not just Lisa; I had other friends who stayed with me from time-to-time.
Later we moved to Lekki, after which I travelled to England. We were struggling actors waiting to make it, so, how could Lisa who had no job be feeding us?' She asked.
On the allegation that she was calling producers not to give Monalisa jobs and ill-advising her not to take major roles, Rita says it is pure lie. 'Basorge cast me in my first role. After that, I started getting roles offered to me.

I was the one that recommended and introduced Monalisa to Zik Zulu and Chico Ejiro. They started giving her roles to play after that.
You can call them to verify this statement. By the time Lisa came back from London, my career had already taken off. So, I don't know where Mr. Richards is getting his information from.'
Segun Dejo-Richards was the husband of star actress, Monalisa, until their marriage broke up recently.
Since the break up, Dejo Richards has been saying he wants his wife back, pointing fingers at Mr. Kool, Monalisa's relative and some of her friends for ill-advising her.