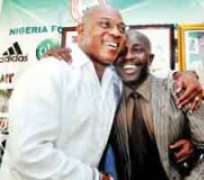 SUPER Eagles new coach, Stephen Keshi, has told Nigerians not to expect any sudden miracle from him as he prepares to rebuild the national team after its African Nations Cup qualification debacle.

Keshi, who signed a five-year contract yesterday with the Nigerian Football Federation (NFF), said he was open to new and genuine ideas from stakeholders on how to move the team forward.

The former Hawks of Togo coach, who revealed that he was at the verge of signing a contract with another African country before he was called upon to lead the Super Eagles, noted that he studied the provisions of the contract with his lawyer before signing it.

He, however, urged the NFF to understand that as a professional, he would deserve his wages as at when due to enable him actualize the dream of taking Nigerian football back to where it belongs.

Earlier, the NFF President, Aminu Maigari, had told Keshi that Nigerians were eager to see the Super Eagles back quickly to its real position in world football, adding that the coach must work hard to actualize the demands of Nigerian fans.

Describing the coach as the right choice to replace Samson Siasia, Maigari promised that the NFF would not interfere in the day-to- day running of the Super Eagles.

The NFF president, who also praised the qualities of former coach Samson Siasia, urged Nigerians to bury the hatchet over the incident that led to his sack, insisting that Siasia was still a top member of the Nigerian football family.

Siasia, who stormed the venue of the unveiling ceremony in solidarity with Stephen Keshi, was later asked by the NFF to present a Nigerian jersey with the inscription, Keshi, to his successor as sign of solidarity with Keshi.

While addressing the media earlier, Siasia surprised his audience when he announced that he has withdrawn his N1 billion suit he instituted against the NFF for the manner of his sack as Super Eagles' coach.

Siasia he would meet with the NFF president, Aminu Maigari to reach an agreement on the settlement of all the outstanding debts owed to him and his two assistants, Simon Kalika and Yusuf Salisu, who were sacked along with him.

He blamed the technical committee of the NFF for sabotaging all his efforts to succeed as Eagles coach, insisting that most of the members worked against his progress in the team.

'I know every one of us as Nigerians was disappointed in our failure to qualify for the Nation's Cup. I want to thank Nigerians for their support and the opportunity given to me to serve. I want to state here that I am very sorry for not qualifying with the Super Eagles. The whole thing has left me devastated, my carrier is shaky right now, it is a big blow on my part, but we all know that sometimes it happens. It is time for me to check around the people, who were by my side as Eagles coach and know who actually was with me or against me,' he said.

Siasia revealed that he decided to go to court because he wanted to let the NFF know that there were areas they failed in the contract, stressing that the contract binding on two parties and not only on him.

'I have decided to withdraw my case against the NFF because my career is my life; I have no grudges against anybody. It was so painful that the technical committee worked to sabotage all my efforts. I hope Keshi would not go through the type of interference I passed through in the hands of the committee.

'No coach on earth would succeed with the kind of contract I had. Honestly, I messed up with that contract, I needed at least three years to build the team, and it is a shame that nobody, not even the technical committee could see what I have done in the Super Eagles team.

'I have laid the foundation for any coach to succeed with the team now; more than 80 per cent of the current players were discovered and brought by me, starting from the Flying Eagles days. I wish Keshi the best of luck, I know he is a good coach and a friend too and I still see Nigerian coaches as the ones to move Eagles forward.'