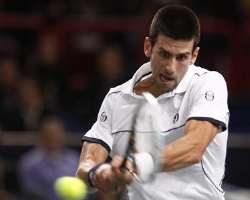 Novak Djokovic pocketed a $1.6-million bonus just for turning up on court before making light of shoulder pains to beat Croatian Ivan Dodig 6-4 6-3 in the Paris Masters second round on Wednesday.

An ATP rule designed to entice top players to take part in the main events states that, as world number one, Djokovic is entitled to a $2-million bonus if he plays in all eight Masters tournaments.

Having skipped the Shanghai Masters through injury, the Serbian suffered a recurrence of a shoulder problem in his semi-final defeat in Basel by Japan's Kei Nishikori last week.

Djokovic, who said he spent his time between Basel and Paris recovering from the injury, dismissed talk that he had turned up in Paris just to cash in the cheque.

"It was really somehow funny for me to see how people are coming up with that story...I even heard that I would get on the court and play a game just to get this money. This is ridiculous, " he told a news conference.

"I need more matches before (the ATP World Tour finals in) London. I think it's obvious that I'm still not (at the) top of my game. But I'm taking things quite slowly knowing that the form will improve each day that I play.

"I believe in that. I have been working quite hard in the last couple of weeks after my injury, and I think things are going in the right direction."

STRONG SERVE
Djokovic, who has won three grand slams and five Masters titles this year, struggled at times against world number 39 Dodig, but served strongly throughout and took his chances when it mattered to book his place in the third round.

A break in the 10th game was enough to take the lead and another in the sixth game of the second helped him wrap it up.

Swiss Roger Federer, seeded three, barely broke sweat in a 6-2 6-3 dismissal of French wildcard Adrian Mannarino to reach the third round where he will face local favourite Richard Gasquet on Thursday.

World number three Murray, who withdrew from the Basel tournament because of injury, had little difficulty with Chardy, setting up a meeting with 13th seed Andy Roddick in the next round.

Briton Murray completed a stunning hat-trick of titles in as many weeks on the Asian swing of the ATP tour after winning the Shanghai Masters on October 16. He also won in Bangkok and Tokyo.

"I take a few weeks off and the first match is always a tough one, even if you've been winning a lot of matches," Murray told reporters.

"But always after taking a break things feel a little bit different. Hopefully I can build on today's win. Maybe if I get through a couple of rounds, I'll feel that momentum."

Spaniard Nicolas Almagro, however, was ruled out of the London event when he lost 6-3 7-5 to Italian Andreas Seppi.

American Fish, the seventh seed, is now only one win away from securing his London spot.

Frenchman Gilles Simon's chances also vanished into thin air when the 10th seed suffered a 6-3 6-0 drubbing by Argentine Juan Monaco in which he was booed by the crowd in the last game.