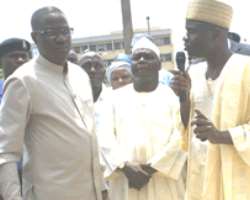 The Arewa Consultative Forum (ACF) yesterday tasked the 19 state governors in the North, monarchs, lawmakers both federal and states and religious leaders to act fast to arrest and find a lasting solution to the crises bedeviling the region.

The Chairman of ACF Peace Planning Committee, Alhaji Mohammed Gusau gave the charge yesterday, when he led his committee members on a sensitization visit to Kwara State Governor, Abdulfatah Ahmed at the government house Ilorin.

According to him, ' the chaos in the northern region has assumed a dangerous dimension, which requires urgent and decisive actions on the parts of the governors, the monarchs, religious leaders and the lawmakers in the region.'

Gusau charged the monarchs and the elective representatives of the people of the North at both the state and federal levels to forge a common front in fighting the menace threatening the peace of the region.

He lamented that the trend had changed the peace, which the northerners were known for in the past, adding that an average northerner used to be known to be peaceful, accommodating and his brothers' keepers irrespective of location, tribe or religious affiliation.

Gusau, a former deputy governor of Sokoto State sued for Nigerians' support for the people of the region in their bid to restore peace to the region, stressing that, to realize vision 2020, ' one leg of the country should not be in crisis.' In his remarks, Governor, Ahmed attributed the incessant crisis in the northern region, to the inability of the leaders of the region to discharge their responsibilities accordingly.

He bemoaned that the crisis rocking the region today was contrary to the principle of brotherhood entrenched by the late Sardauna of Sokoto, Alhaji Ahmadu Bello and other leaders in the old northern region. The governor posited that, 'we have the problem of leadership, our leadership have slept off.

'Our leaders, who should have been committed to the common goal- development of the region, have become self-centred. And this affects the political stability, economy and education.' Rather than fighting the people of South- south over resource control, the governor said the northerners should focus attention on agricultural practice, which he noted had given them more income in the past.