Balewa: From Senegal to Brazil on the trail of Dan Fodio 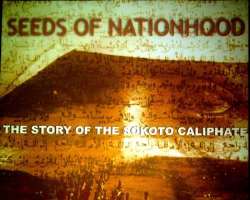 Acclaimed film maker Sadik Balewa is on an ambitious journey to document the influence of Uthman Dan Fodio the founder of the Sokoto Caliphate.

Long before the proliferation of Nollywood Home videos, Sadik Balewa's class of '76 at the Ahmadu Bello University had made a short film on Celluloid. The film was titled A packet of Chin-chin. Balewa, son of Nigeria's first premier Sir. Abubakar Tafawa Balewa, has come a long way from that class project to become an acclaimed film maker. These days he is onto a film project that would set the bar for documentary film making in Nigeria and beyond. The project is a docu-drama feature titled 'Seeds of Nationhood –the Story of the Sokoto Caliphate'. Balewa says he is out to make a different kind of documentary, one that seeks to dramatise important personalities; it is a project that differs from other projects that I had undertaken in the past or that have been worked on in Nigeria. The task before us is not a child's play.

Institutional support for the project is coming from the Abuja Film Village International, which has concluded plans to co-produce Seeds of Nationhood as its first major film project, how ever its transcontinental filming and its non-compromise on quality has ensured that the promoters of the project have to continually keep sourcing for funds.

The passion Balewa to make this film is infectious as he tells the story of how far he has travelled in telling this story. His soft speech and resonating drive in the course of this interview was a reminiscence of the mellifluous voice of his father, Nigeria's benign late Prime Minister who was killed in the military putsch of '66. The golden voice of Africa was a tag his admirers and contemporaries pinned on him.

“There must be variety in the kind of films we churn out, the works of writers, directors, producers must stand out” he said. Balewa goes a step further to hinge his hope on the lot of the crop of educated film makers who are leaving film school in Nigeria and elsewhere on coming to the rescue to raise the bar of film making in Nigeria.

On the current proliferation of Nollywood Balewa opines that Nollywood videos in many ways are good for in the past films on celluloid were sporadic, but now we have an industry, this can be glimpsed in the micro-businesses that have sprung up because of the film industry from Caterers, drivers, and hotels. However negative market forces have dictated most of Nollywood, the stories are so similar and there are no challenges to push boundaries mainly because no one wants to divest from a working formula. But he finds it highly impressive that Nollywood was driven by the private sector, therein leaving a huge vacuum for the government to fill. The government he said can for instance provide security cover for film makers. Aside the latter he strongly believes that for the film culture to thrive in Nigeria initiatives like the Abuja Film Village International are the kind of initiatives governments should key into. There should be a capability to partner with government to make quality films.

Based on personal research Balewa has traced the influence of Uthman Dan Fodio to Senegal, Sudan and to Bahia, Brazil. The transatlantic journey of the disciples of the Dan Fodio is corroborated in Sylviane Diouf's book Servants of Allah: African Muslims Enslaved in Americas the work retraces the 500 year old story of West African Muslims. She further states that these slaves included a disproportionate number of the intellectual elite in West Africa, men far better prepared than the average farmer to sustain their faith.

According to Wikipedia, Uthman Dan Fodio the jihad against Gobir in 1804 to annex Hausa states; the Fulani communication during the war was carried along trade routes and rivers draining to the Niger-Benue valley, as well as the delta and the lagoons. The call for jihad did not only reach other Hausa states such as Kano, Katsina and Zaria but also Borno, Gombe, Adamawa, Nupe and Ilorin. These were all places with major or minor groups of Fulani alims.

After only a few short years of the Fulani War, Dan Fodio found himself in command of the largest state in Africa, the Fulani Empire. His son Muhammed Bello and his brother Abdullahi carried out the jihad and took care of the administration. Dan Fodio worked to establish an efficient government grounded in Islamic law. After 1811, Usman retired and continued writing about the righteous conduct of the Muslim belief. After his death in 1817, his son, Muhammed Bello, succeeded his as amir al-mu'minin and became the ruler of the Sokoto Caliphate, which was the biggest state south of the Sahara at that time. Uthman's brother Abdullahi was given the title emir of Gwandu, and he was placed in charge of the Western Emirates, Nupe and Ilorin. Thus, all Hausa states, parts of Nupe, Ilorin and Fulani outposts in Bauchi and Adamawa were all ruled by a single politico-religious system. From the time of Uthman Dan Fodio there were twelve caliphs, until the British conquest at the beginning of the twentieth century.

Balewa studied Drama/Thearter arts at the Ahmadu Bello University; he has worked at the Centre for Nigerian Cultural Studies and also at the NTA. He has also been a researcher and festival organiser in the UK. He is the first African to have attended the National Film and TV School in the UK where he specialised as a director. Because of his deep seethed desire to produce film he shot the poignant Kasar Mu Ce (This land belongs to the people) in 1990.

As Sadik Balewa continues the arduous journey in making Seeds of Nationhood, it brings us back to the 200 Million Dollars Entertainment Fund of the FG which is yet to benefit any musician, writer or film maker. As members of the creative industry keep praying for the ideal, Balewa continues on his arduous journey from Senegal to Brazil on the trail of Uthman Bin Danfodio