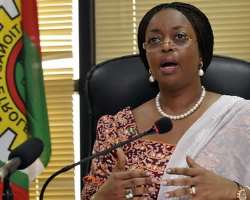 ABUJA, November 01, (THEWILL) - The Revenue Mobilisation Allocation and Fiscal Commission (RMAFC) today accused the Nigeria National Petroleum Corporation (NNPC) of operating secret accounts, which are not being monitored by the relevant agencies as required by law.


Chairman of RMAFC, Engr. Elias Nbam made the allegations at the resumed investigative hearing of the House of Representatives into the non-remittance of N450 billion into the Federation Account by the NNPC.


The chairman further disclosed that RMAFC has discovered illegal deduction of the sum of N1.079 trillion for fuel subsidy by NNPC and the oil marketers under the Petroleum Products Pricing Regulatory Agency (PPPRA) between January and September 2011.

He said “At present, the three J.P. Morgan Accounts, where the payments for export crude oil and gas paid are not largely being supervised and constitutionally monitored by the major stakeholders of the Federation Account, particularly RMAFC. This situation makes the operation of the accounts to be shrouded in secrecy and therefore, subject of several criticisms, suspicion and lack of confidence by all stakeholders.


“From 2004 till date, dividends accruing from the Nigerian Liquefied Natural Gas Limited have not been paid into the Federation Account, the accrued dividends should be paid accordingly,” he stated.


According to him, “the Commission after the analysis of the revenue loss to the federation account due to the exchange rate differential discovered that the sum of N12 billion was the exchange rate differential for the period of January to August 2011, but noted that NNPC has so far paid the sum of N15, 234,862,500 on two installment into the federation account.

He noted that the ineffective functioning of the nation’s refineries led to the sale of most of the 445,000 barrel per day of crude oil allocated to NNPC and that the dollar realized is monetized into naira and paid into the federation account after NNPC had deducted its claims for subsidy.

But countering the allegation, Minister of State for Finance, Yerima Ngama, argued that the RMFAC boss did not request for details of the crude oil account from his office.


While responding to questions on the allegation, Tunde Lemo, CBN Deputy Governor confirmed the proceeds from the sale of crude oil are lodged with accounts domiciled J.P Morgan and managed by the apex bank.


Lemo further explained that the deductions made from the account being managed “are related to subsidy” adding that CBN has no power to stop NNPC from making deductions.

“As far as we are concerned the procedures are followed. There is direct lodgement into J.P Morgan account whenever the crude is sold. We manage that account according to the mandate and we don’t have any reason to say otherwise,” he stated.

Meanwhile, in her presentation, the Executive Chairman of FIRS, Mrs. Omoigui-Okauru, who has been under fire from the Presidency following her submission on the contentious fuel subsidy removal has said that the NNPC does not pay taxes to the federal government.

Omoigui, when pressed further by lawmakers on when the corporation stopped paying taxes said she did not have the records available immediately but submitted that the NNPC was preparing its tax returns until a ministerial order made it stop practice.

She promised to provide details to lawmakers at a later date.

The NNPC has often been criticized for conducting its operations in secrecy. The state-owned oil corporation has also been accused of swimming in monumental corruption in its oil dealings, leaving the Nigerian state shortchanged in the process.