MY FEAR ON REMOVAL OF FUEL SUBSIDY - REP 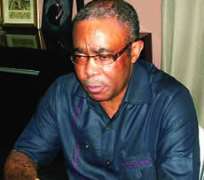 • Uwazuruike
A member of the House of Representatives, Prof. Chudi Uwazurike, has expressed worry over the expected multiplier effect of the removal of fuel subsidy.

According to the lawmaker, who's a member of the House Appropriations Committee as well as FCT committee, when subsidy is removed prices of things in the country would go up.

He would therefore, want the Federal Government to put some things in place before removing subsidy on fuel. He also spoke on other things.

You're a member of the appropriation committee. What would Nigerians expect from your committee?

We have piles and piles of work to do. The Appropriations Committee has made it clear that it would do a budgetary timetable and I think that living by law, the president or presidency and the executive arm have given us the delegation to set the 2012 budget three months ahead of time and things have already started in that regard. The President has also made it clear to our leaders that they will make an effort to ensure that the budget for 2012 is sent in on time. We are hopeful that it is a new day and Nigerians will be better satisfied this time The committee has sent strong signal that our focus will be year round oversight implementation; not just the budget but implementation of House decisions. This time the committee is clear that once things are budgeted, they must be executed. This is a 'can do' attitude; we want to see the country move forward on infrastructure and several other things.

Are you satisfied with the present crusade against corruption?

I am in support of the crusade to checkmate corruption in Nigeria. I am satisfied, though the wheel is grinding slowly. This appears slow because to convict somebody, you really have to find proper evidence. Allow the law take its due process. If the idea is to witch-hunt, that is where we will be so unfocussed. If somebody is accused of corruption, let him be found guilty. In other words, let us institutionalise the process of checkmating corruption rather than making it a dramatic kind of thing. We capture the governor and make drama out of it. We should allow the law courts to determine their fate. What I am suggesting now is quite simply. We should focus on the massive resources that we have. Let us utilise them well enough. I understand that resource control is a major cancer. That cancer cannot be cut off in one day. Let us resolve the problems; we must address the problem of unemployment, fuel subsidy, hunger, gender inequality, etc. We have to talk about primary healthcare. These are problems you can't wish away. These are specific problems we should address

What is your opinion of security in the country?
It is a tragedy. We need to pay security operatives well. If the state is not secure, there's a problem. In any case, I am happy that the president's recent meeting with security chiefs is yielding fruits. Let us have a real national dialogue on security matters. Some people see Nigeria as a failed state. I guess insecurity is one of the things they would mention. The first law of national life is security. The people must feel secure. There must be food security as well as employment security. We are not doing those things right at present.

How would you assess the EFCC?
I think EFCC has all it takes to do the job. You must know that this is not a simple task. There are laws. I think that the EFCC needs to express itself in terms of where they are coming from. I don't think they should just arrest people to show off. EFCC can give its best. I also think that as old philosophers would say, 'there is no verdict if one honest person is convicted.' There has to be balance. Do they have the determination to take decision? In some cases, they have to be decisive. In other cases, they have to be cautious. I am satisfied with their efforts. However, they can improve on their lapses.

Where do you stand on the plan to remove fuel subsidy?

I am not in support of it. There are certain things that the Federal Government needs to do, in terms of infrastructure and job situation, etc. I believe that removal of fuel subsidy will not solve any problem. My concern is that once we do this, prices will rise. Once prices rise, the poor will be devastated. They will feel it right away. We do not want that. That is not what democracy is all about. It is a people's democracy and we should always be concerned about what broadens the gap of inequality. The gap between the rich and the poor is too wide. The country needs a social security platform, which will give everybody a chance to live a normal life. There should be constant dialogue. So long there's democracy, so long we need leadership that would make our lives better. It's only then we would be moving forward. I urge the people to be strategically patient. They should understand that democracy works with time. Eventually, we will get there.

What do you think is the way out of Nigeria's problems?

We struggled with the realities of underdevelopment and having gone beyond that era, we now have the need to sustain the vision of Nigeria as a medium scale power that actually works. Nigeria should be a medium scale visionary power on the African continent and a fest developing part of the world. We also need to spell out document after document on the wonderful vision, rolling plan and philosophy. These things can actually be accomplished in a few years.

What would make other elite get involved in politics?

Politics is a vocation. You have to have the zeal for it. There are people in government who have no business being there and there are people who have the ideological commitment to good governance. In my book, 'Instrumental Pan-Africanism,' I look at Africa as a continent. I worry that if Africa does not get it right, we may disappear as a continent within the next 100. Here, we are busy fighting each other; we are basically worrying about religion, while western countries have gone very far. They have moved from phase one to phase two of civilization. When we have squabble over tribal and inter-tribal problems, they laugh; they look at us as people who have no idea. Without unity, without leadership, without unity of purpose, we cannot move forward; we cannot get things right. With the right leadership and strength of purpose Nigeria can still move forward. I believe Nigeria can move; what it takes is right leadership with right frame of mind and right. We must have a leadership with the right frame of mind. Nigerians are wonderful. If Nigerians see good leaders, they would follow. The late Murtala Muhammed was of my generation. He gave us vision and principle. He did his best. That shows what leadership can do.