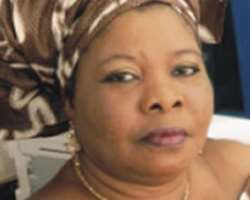 Members of the Actors' Guild of Nigeria (AGN), have concluded plans to raise funds for the burial of top actress, Remi Abiola.

Responding to a circular sent to the guild by the burial committee of the late actress, the leadership of AGN has made its intention to help them organise a befitting burial for their late member.

The deceased, who was one of the late MKO Abiola's wives, was a member of AGN, ANTP and NANTAP before she died.

According to a member of her burial committee, Hakeem Adekunle Rahman, efforts are currently being made for her corpse tobe brought to Nigeria.

He said that the late Remi's Christian wake-keep will be held at the Lagos State Television blue roof hall at a yet to be disclosed date, while other burial programmes will be released soon.

The actress, who had a child for the late MKO, died of lung cancer in a New York hospital two weeks ago.