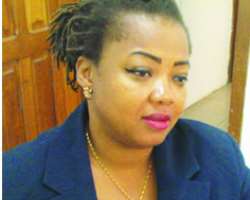 Ilori
Managing Director and Chief Executive Officer, Kellow West Africa Nigeria limited, Olukemi Ilori, has said there has not been a concerted effort on government at all levels and policy makers to formulate laws, policies and regulation to adequately protect patenting in herbal medicine.

Ilori who described the field as an area that requires multidisciplinary approach, saidthat until patenting is given a backbone, indigenous knowledge and native resources will continue to be stolen and ferried to other shores.

Speaking on the relevance of integrating the orthodox and traditional medicine in healthcare delivery, there should be synergy between the two because we're exposed to the two.

She spoke more on Kellow Health and Lifestyle Goods and Services Trade Fair and other issues bordering on natural healthcare delivery system.

I organize the trade promotion fair for health and lifestyle services every year. We're in the eighth year now. We do it in the third week of October every year. The fair is aimed at promoting health and lifestyle goods with a special target of promoting made in Nigeria goods and enabling them to interact with other people in that line of business, improve their products, upgrade the indigenous technology here, especially in the area of alternative medicine.

As a pharmacognostist, it's of special interest to me because of the loss of the knowledge, which is a threat that has faced us prominently, more and more in recent years, as people are leaving the family traditions of healing and working in the cities. We can at least retain that knowledge even if they're not doing those things, I mean looking at the science side of it.

Setbacks in patenting herbal medicine
To the best of my knowledge, there hasn't been much done in that area. It's an area that requires multidisciplinary approach. You need lawyers who are vast in international law as well as the knowledge of our own local peculiarities as well. If indigenous knowledge is not patented it will be lost, period. That is because, people are reluctant to divulge information, which they believe, is power, and which if they give out, somebody else will take advantage of and they get nothing for it. And when such knowledge is lost, it's lost to humanity.

So, for us to be able to retain a lot of that knowledge, we have to make people feel that they get something for their knowledge. Their knowledge will not just be stolen from them without them being recognized for it because it took a lot for them to get to the point where they got to know that this thing can be used for that.

The way forward is that government at both the state and federal level should have laws that help to patent indigenous knowledge. We have been patenting already. We have patenting in things like goods and things like that. But for patenting of indigenous knowledge, to the best of my own knowledge, is virtually non-existent. For instance, we have people taking things from Nigeria - herbs, exporting them when they know they have the need.. Like for sickle cell anaemia, the case of Zantozylos, Atiloidis, it used. These things need to be patented, this knowledge is not just taken away and people get disenfranchised.

The fair in health and lifestyle goods and services

The health and lifestyle sector is a very unique one because global trade in the health and lifestyle sector runs to trillions of dollars. It's a huge economic volume. In some countries like China, they even have their own chamber of commerce. They're not just referred to as a sector but have their own chamber of commerce. So, it's an area where trade impacts on the economy and also impacts on the disease burden, the health of the people. So, it's a very, very unique area.

Trade promotion in the health and lifestyle area involves services also because the people who render services in the health sector are highly skilled people. It takes a long time for them to be trained and when they train and acquire the skill, they are people who are very much sought after in all societies because they help the work force of the society to be able to perform as they get older. You know that we have a lot of our trained skilled personnel going outside - nurses, physiotherapists, and pharmacists. So, it's an area of high skill. Even the alternative medicine practitioners, like bonesetters and all that. So, it's a highly skilled area.