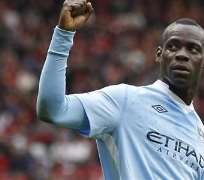 Manchester City humbled Manchester United 6-1 at Old Trafford on Sunday to extend their lead at the top of the Premier League and signal their intent to wrest the title from their arch-rivals.

United collapsed after the sending-off of defender Jonny Evans early in the second half and City carved open their shell-shocked opponents with Mario Balotelli and substitute Edin Dzeko scoring twice each.

City's title challenge was given a further boost when nine-man Chelsea blew the chance to move into second place by losing 1-0 to Queens Park Rangers in the west London derby after Jose Bosingwa and Didier Drogba were sent off in the first half.

Tottenham Hotspur stretched their unbeaten league run to six matches with a 2-1 win at Blackburn Rovers, who fell to the bottom of the table, Arsenal continued their climb up the standings with a 3-1 home win over Stoke City and Everton won 3-1 at Fulham who are now one point and one place above the relegation zone.

Manchester City lead the table with 25 points followed by United on 20, Chelsea and Newcastle United on 19 and Spurs, who have a game in hand, on 16.

STUNNING SUCCESS
City's stunning success, their biggest at United since a 5-0 win in 1955, will long be remembered.

United, unbeaten this season, had not lost at home since April last year, had won their last 19 league games at Old Trafford and had only lost to City once at home in the league since 1974.

All that counted for nothing, though, as Balotelli and late substitute Dzeko scored twice each and Sergio Aguero and David Silva completed the rout, the final three goals coming in the last four minutes.

United played most of the second half with 10 men after defender Evans was sent off for trying to haul down Balotelli. The home team's only consolation came from Darren Fletcher who scored a fine goal nine minutes from time to make the score 3-1.

But City crashed in three more goals in the dying minutes as United caved in at the back to concede six goals at home in a league match for the first time since a 7-4 defeat by Newcastle United in 1930.

COOL MANCINI
City manager Roberto Mancini, in charge of City for the 100th time, kept the result in perspective.

"We played very well and for me the three points are more important than the scoreline," he told reporters.

He said he was delighted for Balotelli, who escaped a blaze at his house in the early hours of Saturday morning after a firework was let off in his bathroom.

After scoring the opening goal in the 22nd minute, the 21-year-old Italian lifted his shirt to reveal a message reading "Why Always Me?".

United manager Alex Ferguson said the defeat was the biggest he had suffered in his career.

"It was my worst ever day. That's the worst defeat in my history ever, I don't think I have ever lost a match 6-1 in my life, even as a player, so it's a challenge for me too."

Chelsea failed to capitalise by losing at Queens Park Rangers in the first league meeting between the near neighbours for 15 years.

The visitors fell behind when David Luiz was adjudged to have fouled Heidar Helguson after 10 minutes and the Icelandic striker struck from the spot for what proved to be the only goal of the game.

Chelsea lost Bosingwa after 33 minutes for a foul on Shaun Wright-Phillips and were reduced to nine men eight minutes later when Drogba was red carded for a two-footed lunge on Adel Taarabt.

Chelsea never stopped battling for the equaliser but could find no way past an inspired Paddy Kenny in the Rangers goal.

DUTCH DOUBLE
Tottenham closed the gap on Chelsea and United with a 2-1 win at Blackburn, Dutchman Rafael van der Vaart scoring both goals either side of one from Blackburn's Mauro Formica.

That result took Spurs up to fifth but sent Blackburn to the bottom of the table with angry Rovers fans again demonstrating for coach Steve Kean to be sacked after just one win in nine games.

Arsenal won their fourth successive league match at the Emirates with a fine cameo from striker Robin Van Persie who came off the bench and scored twice as the Gunners overpowered Stoke.