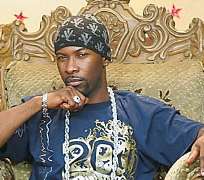 I remember when I was in school, the first news writing tip I got was that, 'when a dog bites a man, it is not news, but when vis a vis, then it becomes a good story.' That is why much is expected from celebs to stay out of bad publicity.

Goldie and Ruggedman threw decorum away when they both took on a fan on a social networking site, twitter on Monday October 10. The fan with the twitter handle, akegag, tweeted, “Ruggedman deserves to die after making us endure all the wacky s**t he makes us hear, It would be cool if he was dead though, wack rapper.”

In a reply, Ruggedman tweeted, “please twifam, join me as I mourn the death of akegag, he died of a homosexual related disease, he was a gay.”

In a support of to colleague in the music industry, Goldie picked on akegag when she tweeted, “you are telling celebs that they should die, it is uncalled for. The other day, you said I wasn't worth it, I ignored you.”

Ruggedman tweeted these curses on akegag, “Father Lord God, for akegag and anyone like him, let his prosperity be cut off; and in the generation following, let their names be blotted out and cut off the memory of them from the earth. Let his children continually be vagabonds, and beg; let them seek bread in desolate places. Let his prayers become sin. In Jesus name I have prayed. AMEN.”

While Ruggedman was doing the curses, the following was going on between Goldie and akegag.

Akegag: “When will Goldie change her weave, it is nasty now, maybe it is Brazilian.

Goldie: “You will be nothing but a fake wack bas***d who thrives on twitter famzing and will be forgotten as soon as a new social network comes up.”

Goldie: “No wonder you are confused, your uncle actually paid to f**k your mother. So sad you don't even know who your daddy is. Meaning your mother was a never do well whore who f**ked whatever was paid to her to, including rodents and pigs.

Akegag: I bet you slept with all the producers and they did you till all your hair fell off, hence, the weave on. Goldie is actually her stripper name and Ruggedman will remain rugged and wretched. Goldie sang you don't need to pay to touch her body. I guess she's a free bi**h with a bald hair-do.

Goldie: I am having fun at your expense; I might walk around bald for all that I care, I will still be Goldie, and you? I have nothing more to say to you, you can kiss my fake blonde weave-on, lol and go RIPieces as Ruggedman has already said. Cheers.

But in a turn around, Goldie tweeted, “I really appreciate your uncalled for insults to me today, they have made me stronger. I am also sorry for replying you in the same vain. God help us all.”

Akegag replied, “.You insulted me first. All I said was your hair do and you descended on me.” And to Ruggedman, “Thanks for the prayers; I don't think God answers such. You are still dumb though.”