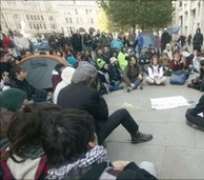 An anti-capitalist protest in London's financial district is continuing for a second day, with protesters gathered outside St Paul's Cathedral.

The church square was the scene of protests by about 2,000 to 3,000 people on Saturday with at least 250 camping overnight, according to organisers.

Police said 200 to 300 protesters were still in the area on Sunday evening.

The demonstration is part of a global day of protests urging politicians to listen to people and not to bankers.

The cathedral opened as scheduled at 0800 BST for services and visitors.

The canon chancellor of St Paul's, Reverend Giles Fraser, said he was happy for people to “exercise their right to protest peacefully” outside the cathedral.

Dr Fraser added: “This morning early there was a line of police who were kindly trying to protect the cathedral but I thought that was unnecessary, so we brought them down and there's been no damage to the cathedral and it's been a very peaceful protest as far as I've seen.”

Police had initially said it would be “illegal and disrespectful” to camp in front of the cathedral, but they later announced they would not be moving anyone on from the site.

'Not solving the problem'
Saturday was promoted as a day to “unite for global change” by organisers, inspired by the US's Occupy Wall Street movement which has been going on for about four weeks.

Protesters gathered outside the cathedral after an earlier attempt to protest outside the London Stock Exchange was blocked by police.

One overnight protester, Nathan, told the BBC: “The reason that I'm here is basically about the corporate greed. The corporations that have basically infiltrated their way into our government and the way that they make policy.”

Paul Mason
Economics editor, Newsnight
Read more from Paul
'Occupy' is a response to economic permafrost
Another protester, Joshua, said he was confident the protest numbers would swell, based on the US experience.

Foreign Secretary William Hague told the BBC's Andrew Marr Show that protests would not be the answer.

He said governments controlling their debts and deficits would be the solution.

Mr Hague added that the government had to “boost the human capital of our country”, which it was doing by offering more apprenticeships and increasing the number of university places.

“These are the real positive answers that will address it. I'm afraid these protests on the streets are not going to solve the problem,” he said.

'Disproportionate force'
Although police did not give a crowd estimate, BBC reporter Phil Bodmer said about 2,000 to 3,000 protesters gathered on Saturday, while organisers said between 4,000 and 5,000 people attended.

On Saturday evening, some protesters complained that police had become heavy-handed and said they had been “kettled, grabbed and thrown off the steps forcefully”.

Scotland Yard said a “containment” had been in place at St Paul's Churchyard for a time on Saturday “to prevent breach of the peace”.

Eight people have been arrested, of which six have been charged for offences including affray and cannabis possession.

There have been no reports of any injuries, police said.

There were some clashes between police and protesters on Saturday, but the situation remained largely peaceful

Earlier on Saturday, demonstrators attempted to set up another camp outside the London Stock Exchange in privately-owned Paternoster Square in the City, but were prevented by the police.

After protesters returned to St Paul's Churchyard, the square in front of the cathedral, officers prevented more people trying to join the protest by cutting off access points.

Activists carried banners with slogans such as “We are the 99%” and “Bankers got a bailout, we got sold out”.

A section 60aa order – which gives officers the power to force people to remove masks covering their faces – is also currently in place in the City of London.