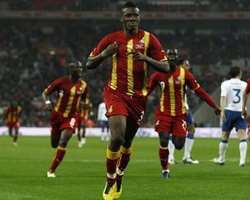 GHANA'S ASAMOAH GYAN CELEBRATES HIS GOAL AGAINST ENGLAND DURING THEIR INTERNATIONAL FRIENDLY SOCCER MATCH AT WEMBLEY STADIUM IN LONDON MARCH 29, 2011.
Listen to article

They will head either Group B or D at the tournament where co-hosts Equatorial Guinea will be in Group A and Gabon in Group C.

Angola, Guinea, Zambia and Tunisia are ranked second seeds while Burkina Faso, Mali, Morocco and Senegal will be drawn from the third tier.

The lowest tier of teams is made up of newcomers Botswana and Niger plus Libya and Sudan, who qualified at the weekend in the best runners-up slots.

The seedings were determined on previous Nations Cup tournament results. The draw is in Malabo, Equatorial Guinea, on October 29.