AJANI VOWS TO SHOOT DOWN INTERCLUBE 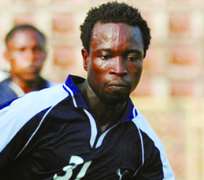 Ajani
Pocket dynamite, Ibrahim Ajani, has promised to deliver the goals that would give Sunshine Stars victory over Interclube of Angola when both sides clash inside the Gateway International Stadium in Ijebu Ode, Ogun State, in the first leg semi-final of this year's CAF Confederation Cup.

Interclube dumped out Nigeria's second flag bearer in the competition, Kaduna United, at the end of the group phase, but Ajani shared his coach's (Gbenga Ogunbote) position that Sunshine would prove a tough nut for the Angolan side to crack.

'Sunshine Stars is not the same as Kaduna United. We are aware that Interclube is a good side, but we are well prepared for them. We want to win the CAF Confederation Cup. Thank God we have no injury worries and the spirit is very high among the players in camp,' the diminutive striker enthused ahead of today's clash.

'We plan to win the match with a wide margin to make the return leg a mere formality. Our target is to win by 3-0. We would try as much as possible to prevent them from scoring any goal here in Nigeria,' he said.

'I hope to score against Interclube. My target is to emerge the highest goal scorer in both the Nigeria Premier League and the Confederation Cup,' he revealed.

Meanwhile, Sunshine Coach, Ogunbote, believes that his side could go all the way despite making its debut on the continent.

'Like I always say, we are not afraid of any team in this competition, though we respect Interclube. We will take them as they come. Very few people gave us a chance, but here we are in the semi-final. We have set for ourselves a new target, which is to reach the final and then, win the continental Cup,' Ogunbote stated.

'We will not let Nigerians down, but they should keep praying for us. We also request that they should come to the stadium and cheer us to victory,' he added.