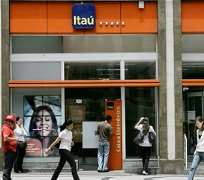 It was around midnight on a Saturday when a group of men in gray overalls calmly strolled into a bank on Brazil's equivalent of Wall Street, waved to the guard and said they were there to fix the alarm.

More than 10 hours later, they had pulled off one of Brazil's biggest bank heists -- emptying out more than 100 safe-deposit boxes for a multimillion-dollar bounty of rubies, Colombian emeralds, antique Rolex watches and cash.

No alarms went off, and the guards offered no resistance. The thieves were so relaxed, in fact, that they reportedly ordered fast food and then left the wrappers behind with their tools: a set of drills, a blowtorch and a chain saw.

The August 27 robbery at the Itau Unibanco bank on Sao Paulo's Avenida Paulista, and the inept investigation that followed, highlight the security challenges still facing Brazil. Despite considerable progress in some areas, crime remains a major drag on the economy, and it is arguably one of the biggest obstacles standing between Brazil and its dream of attaining rich-world status in the coming decade.

The economic consequences of Brazil's crime problem can be seen everywhere -- from pockets of poverty that have so far been untouched by a long economic boom, to less obvious areas like a long slump in Brazilian manufacturing.

One of the first things visitors notice in big Brazilian cities is the astounding number of private guards in suits keeping watch at hotels, restaurants, apartment buildings -- virtually any place where there's money.

The costs are massive. All told, Brazilians spend about as much every year on private security -- roughly $8 billion -- as the U.S. government spent on security contractors such as Blackwater during the first four years of the Iraq war combined, according to data from Brazil's biggest private guards' union and the U.S. Congressional Budget Office.

There are also less obvious security-related expenditures, such as high insurance premiums. Executives in Sao Paulo, Brazil's business capital, have spent an untold fortune on one of the world's largest fleets of helicopters and armored cars as they try to evade assaults.

Even the city's notorious traffic, which costs billions of dollars a year in lost productivity, is partly a consequence of crime, as people who are too scared to take public transport choose to spend hours a day in their cars instead.

Add all that up, and security is right there with high taxes and heavy bureaucracy as one of the biggest elements in the so-called "Brazil cost" -- the high operating expenses that make Brazilian goods so expensive compared to other countries.

Officials will likely have to get a better handle on the problem if President Dilma Rousseff is to fulfill her goal of making Brazil a middle-class country by 2020.

"The trend is positive ... but there's an enormous amount of work still to be done, and the cost to the economy in the meantime is substantial," says Geert Aalbers, general manager for Brazil for Control Risks, a security consultancy.

FALLING MURDER RATES A HOPEFUL SIGN
It's hard to tell which was scarier -- the Itau Unibanco heist itself, or the investigation that followed.

For reasons that are unclear, police did not begin their investigation until about a week after the robbery, a source close to the probe told Reuters on condition of anonymity.

The two guards inside the bank were not interviewed by police until 11 days after the heist, the source said.

One of the 12 or so robbers has since been caught. Yet that has done little to quell speculation in Brazilian media that police were somehow involved with the heist -- especially given the eerie confidence with which the robbers acted.

Marcos Carneiro, a top official for the city's civil police, admitted the probe had been plagued by "operational flaws" but denied police involvement in the crime.

Looking beyond the Itau Unibanco case, Sao Paulo officials acknowledge problems but also highlight major advances -- namely murders, which are down 75 percent in the last decade.

"Our big priority since the 1990s has been murder, and we needed to focus on that above all," Ferreira Pinto said. "Our next priority is property crime, without a doubt."

Sao Paulo is clearly safer than it was a decade ago. The evidence is not just in data but in street scenes: a commuter train full of people fidgeting with their iPhones, middle-class revelers walking late at night downtown, and other glimpses of normal urban life that were hard to find not so long ago.

Nationwide, the number of bank robberies has actually plummeted in the past decade -- from about 3,000 a year to just 343 in 2010, according to Brazil's main banking federation.

Security progress has been even more dramatic in certain areas of Rio de Janeiro, where the murder rate has also fallen, and banks and other companies are opening up shop in troubled neighborhoods for the first time.

Helping matters further: Brazil's robust economy, which has lifted 40 million people from poverty in the past decade, reducing social inequality and unemployment.

"Things are slowly improving, especially in the biggest cities," said Nivio Nascimento, an official in the Brazil office for the United Nations Office on Drugs and Crime, or UNODC. "For the first time, you have an alignment between levels of government that have made (crime) a priority."

POLICE "DON'T HAVE THE RESOURCES"
Despite the progress, business leaders say they see no end in sight to their decades-old arms race against crime.

The reason: While the number of crimes has fallen in some areas, those that do occur are getting more sophisticated -- and are more likely to target high-value assets, as the Itau Unibanco assault shows.

When police crack down on one kind of offense, crime syndicates simply move on to a new, more vulnerable target. In Sao Paulo, it seems like a different crime comes into fashion with every month: February saw a wave of assaults on apartment blocks, June saw restaurants fall victim, and now it's banks.

Meanwhile, officials are discovering that economic growth can often fuel crime rather than stopping it. In parts of Brazil where the economy is booming but law enforcement is weak, such as the northeast, murders and assaults have soared.

"We don't see anything that would allow us to reduce our (security) costs, and I'm not optimistic," said Abram Szajman, president of the Fecomercio business association in Sao Paulo.

"The authorities simply don't have the resources to deal with this problem," he added.

Ferreira Pinto, the Sao Paulo security chief, doesn't dispute that. "We have our limitations, companies are aware of them, and they end up taking care of themselves," he admitted.

The UNODC's Nascimento says that Brazil could make inroads by focusing more on border enforcement to slow the flow of drugs. He also said that improvements to the justice system, including better enforcement of minor crimes, could prove effective against both petty thieves and organized crime.

"They need to remember that it was tax evasion that got Al Capone," Nascimento said with a laugh.

Yet the outlook for game-changing reforms under Rousseff's administration is bleak. A government official told Reuters that Rousseff is "concerned" about the recent security problems but sees crime as primarily an issue for states and municipal governments -- a stance echoed by her predecessors.

"I think we're 20 or 30 years away from any serious improvement," Szajman said. "It will require education ... a change in mentality. There's no guarantee of success."