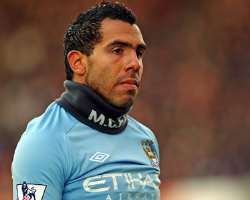 Manchester City striker Carlos Tevez is to face a disciplinary hearing after allegedly refusing to play in the defeat by Bayern Munich.

City launched an inquiry and suspended the 27-year-old after he failed to come off the bench during the 2-0 reverse at the Allianz Arena in September.

In a statement, the club said: "There is a case for Carlos Tevez to answer of alleged breaches of contract.

"He will face disciplinary proceedings. The hearing will be convened shortly."

It concluded: "Carlos will be required to report for training on Thursday."

The Argentine striker is expected at City's Carrington training ground early on Thursday afternoon, BBC Sport understands. He will undergo a fitness session and assessment, but will not train with the rest of City's first team.

After the Bayern Munich defeat, City boss Roberto Mancini said: "He refused to come on the pitch. If I have my way, he will be out. He's finished with me."

But in a statement released the following day, Tevez said the dispute was a "misunderstanding" and "confusion on the bench". It is believed that the Argentina international stands by that view and categorically refutes the accusation he refused to play.

City suspended Tevez for two weeks on full pay while they conducted an inquiry, calling the forward to the club for questioning on Monday.

Professional Footballers' Association chief executive Gordon Taylor said: "Manchester City have conducted things in a proper manner and they feel the evidence, as far as I am aware of, justifies a charge.

"There are a number of options to consider but ideally I would like a situation where both parties can walk away from it.

"The most extreme option could be termination [of Tevez's contract] if the evidence justifies that or it could be a suspension without pay, or a fine. That fine could be anything from two weeks up to six weeks, with the approval of the PFA."

Tevez can request the company of the club captain Vincent Kompany or a member of the PFA to be present at the hearing, which could take as long as two weeks and will be chaired by a senior City figure who has not been part of the initial investigation.

If the ruling goes against the former Manchester United man, he could then appeal, with that hearing likely to involve a representative of the Abu Dhabi-based consortium that took over at Eastlands in 2008.

If he is again unsuccessful, Tevez would be able take his case to the Premier League, meaning the dispute may not be settled until mid-December.

Tevez has scored 53 goals in 91 appearances since joining City in the summer of 2009.

In May, he captained Mancini's side as they beat Stoke City in the FA Cup final at Wembley to win the club's first major trophy in 35 years.

However, Tevez has twice asked for a transfer away from Manchester.

His first request, which was later withdrawn, came in December 2010 when the former West Ham man said he was homesick.

Tevez again asked to leave City in July, citing family reasons, and looked set to move before a proposed deal with Brazilian side Corinthians fell through.

But a move failed to materialise and BBC Sport learned that Tevez, who has failed to score in five appearances this season, had given up on leaving City before the end of the summer transfer window.

After Tevez was suspended by City, the club rejected an offer from West Ham to take him on loan, while Corinthians have indicated that their interest in signing the striker is over.