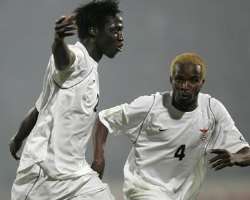 Former Italy international Dario Bonetti is a shock first victim of an expected cull of coaches after the conclusion of the African Nations Cup qualifiers at the weekend.

Bonetti has been sacked by Zambia despite the side qualifying for the finals in Equatorial Guinea and Gabon next year.

Zambia finished top of their group but a goalless draw at home in their last game against Libya angered officials and supporters.

"We don't think he can take this team any further," Football Association of Zambian president Kalusha Bwalya told reporters on Tuesday.

"We need someone to come in and shake up the squad because we have ambitions of playing at the next World Cup."

Bonetti, 50, had been in the job for 14 months and amassed a record of eight wins, three draws and four losses.

The axe is expected to fall on several other coaches in the coming days and weeks.

Nigeria's football association have demanded an explanation from coach Samson Siasia after they missed out on Nations Cup qualification.

Uganda's Scottish coach Bobby Williamson said his fate was now in the hands of officials after they failed to win at home at the weekend and qualify for the first time since 1978.

In South Africa, coach Pitso Mosimane's tenure remains shaky after they missed out on qualifying for 2012 because of his failure to understand the rules.

He thought his team needed a draw to go through but in fact they had to win because head-to-heads trumped goal difference when teams finished level.

"We will be looking at his position and continue to ask questions of how did this happen and why did we interpret the rules incorrectly," said Robin Petersen, the South African Football Association's chief executive.

Growing speculation over the future of Javier Clemente as Cameroon coach prompted the country's football federation to last week issue a statement denying it had done a deal with ex-France boss Raymond Domenech to take over.

Former Spain manager Clemente failed to qualify Cameroon for the Nations Cup -- only the second time in the last 16 attempts that they have missed out on the African championships.