THIS HAUSA MAN HAS LIVED IN ONITSHA FOR 81 YEARS 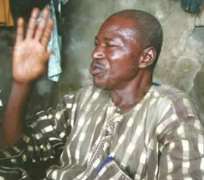 Mallam
For Alhaji Baba Mallam, an Hausa man from Kano State, who has lived in Onitsha, Anambra State for 81 years, his people enjoyed the commercial city in the past than they do presently.  Alhaji Mallam who says he has full Igbo identity, having spent 81 years of his 86-year sojourn on earth in Onitsha and speaks Igbo fluently, said in the past, the Hausas in Onitsha had attended the Ofalla festival with the natives and had formed bulk of the people, who attended the annual festival.

As a little child, Mallam who was coming with his parents to transact business in Onitsha and later travelled back to Kano had after six years of the journey settled down in Onitsha and had since continued to live in the town.

Alhaji Mallam whose wife hails from Ojoja in the old Eastern Region got 12 children from the marriage. Two of the children died and he is left with 10, who are now all married with their own children. Today he has about 46 grand children.

Even after most of his business partners have crossed over to the other side of the Niger and settled in Asaba, Delta State due to a problem they encountered some years back which resulted in loss of lives, he has refused to leave, but has continued with his onions and beans business at the Bridge Head Market, Onitsha.

His conviction is that Nigeria is one and belongs to all irrespective of tribe or religion and that any Nigerian could settle and carry out his business anywhere he or she wants.

Mallam who spoke with Daily Sun in an interview also looked at the Boko Haram menace. Excerpt:

Where exactly is your state of origin?
I come from Kano State in the former Northern Nigeria.

How long have you lived in Onitsha?
I came into Onitsha for the first time when I was six years. I came with my parents who were coming here on business trip from the North.

We were coming here to sell things and six years after that, I settled down in Onitsha and grew up here. At that time Onitsha was not developed at all.

What was Onitsha like when you came into the town?
Not many Igbos were living in Onitsha then. People were coming from the hinterland to buy things. Hausas and Nupes occupied all these areas where we are now.

Onitsha Main Market area was occupied by Hausas and there were just a few people in the town. We Hausas formed the bulk of those who used to attend the Ofalla Festival of Obi of Onitsha whenever there was one. We joined the indigenes to celebrate the festival. There was mutual love and understanding better than today.

What made you to live here in the past 80 years?
Igbos are hospitable people. Before the civil war, there was no problem and it did not matter where anybody came from. It was not until the war broke out that many Hausas deserted Onitsha.

I did not go because nobody knew where I come from. I was still moving around in Onitsha and when anybody confronted me, I told them I come from Benin. That was how I survived in Onitsha until I joined others to move right into Biafra city where I stayed until the war ended.

What would you say about Nigerian politics?
Most politicians now seek for their individual pockets. When M.I. Okpara was the Premier of Eastern Nigeria and some other politicians of that time were in leadership, things were much better. They cared for the people and had better policies and programmes than our present crop of politicians. We did not hear about the kind of money that our present politicians often cart away now. There seems to be too much greed now, too much rancour and too much hatred in the land and in each election, we hear about massive rigging and violence. They are not good for our polity.

Politicians should endeavor to use the nation's enormous resources to provide good welfare for Nigerians because the nation has more than enough to cater for everybody, but our wealth is in the hands of a few. This is why a lot of people go into politics, not because they have any interest for anybody, but they see it as an avenue to amass wealth.

There may not be meaningful development until our politicians, our leaders begin to demonstrate genuine desire to work for the masses whose interests they are made to serve.

Are you disturbed about the killings in the country?

All well meaning Nigerians should be concerned about what is happening, about mass killings and destruction of property. There is no justification for all the lives that are being lost almost on daily basis.

Those who are involved in the killings should have a rethink and government must be serious at tackling the problem frontally.

As a Muslim, is Boko Haram a recognized Muslim sect?

There is only one Islam, but you know that these days, people sometimes breakout and form diverse groups which propagate diverse beliefs. It is in Islam and it is in Christianity. The fact remains that Islam does not preach taking of human lives.

What would you suggest as your solution to solving Boko Haram problem?

My suggestion is that government should be stern in dealing with them. I do not believe that those members of Boko Haram are Nigerians otherwise they could not have been doing what they were doing. They should, therefore, be made to leave Nigeria if they are not comfortable with us, so that peace loving Nigerians should stay in peace. They should be given a chase. Government must do everything possible to find out who their sponsors are and deal with them. When their sponsors are identified and dealt with, they should run away and leave the country for genuine Nigerians. It is a wrong notion for anybody to think that they have the blessing of the Muslims or the North. They are simply enemies of the nation.

Anambra State Government wanted to drive you people away from this your business area, what is the position now?

Everything has been quiet in the last two years. Nobody is disturbing us for now. The fact is that this place (Onitsha side of the Niger Bridge Head) was given to us by the Federal Government and we have been paying rent on it. We now also pay to the state government which, of course, amounts to double taxation, but we do not mind. Our major problem is that a lot of us who were doing business here before have relocated to Asaba, thereby shifting the business to Asaba and for that reason, we are virtually doing nothing here. You can see that business is not moving. If it were before this place would have been very busy, but it is no longer so.

What would you expect the Federal Government to do, especially on our roads in the South- East?

Let me seize this opportunity to appeal to the Federal Government and the state government to attend to the roads in the South-east which are now in deplorable condition. It is pathetic that travelling from Onitsha to Enugu is now made so difficult because of the bad road.

A journey of about an hour now takes about three hours because of bad nature of the road. We have the resources to put our roads in order.