RALPH FIENNES AND DAVID CRONENBERG TO GET BFI HONOUR 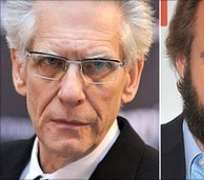 Cronenberg, known for films including The Fly, Crash and Eastern Promises, will be the first Canadian to receive the BFI's highest honour.

His latest film, A Dangerous Method, will premiere at this year's LFF.

Fiennes' directorial debut, Coriolanus, will also receive a gala screening at the event.

His contemporary adaption of Shakespeare's Roman drama was shot over eight weeks in Serbia. Fiennes takes the title role, with supporting actors including Gerard Butler, Vanessa Redgrave and James Nesbitt.

In a statement acknowledging his award, Cronenberg said: “British cinema has been a potent inspiration for me and to be associated with this particular group of filmmakers is tremendously exhilarating.

“This is a monumental, in fact overwhelming, honour, and my being the first Canadian to receive it makes it all the sweeter.”

Fiennes, who received an Oscar nomination for his role in Schindler's List, said he was “extremely honoured and delighted” to be given the award.

The Fellowships will be presented at the LFF's 2011 awards, on 26 October.

Frears, who was twice Oscar nominated – for The Queen in 2007 and The Grifters in 1991 – said it was “very nice to be complimented by Europe”.

He will receive his award at the 24th European Film Awards Ceremony on 3 December 2011 in Berlin.