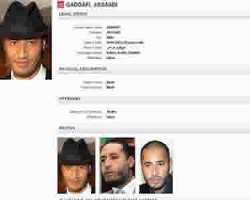 The government of Niger said on Saturday that Libya's new rulers were welcome to question Muammar Gaddafi's son, Saadi, who has taken refuge in the West African nation, but it was unlikely that he would be extradited to Libya any time soon.

Niger's justice minister, who is also the government spokesman, said on Niger national television late on Saturday that Saadi could be questioned under an existing cooperation agreement between Tripoli and Niamey.

"If it is to question Saadi, the National Transitional Council (NTC), which we have recognised, can freely come to Niger, under the existing accord," said Marou Amadou.

"However, I reaffirm that at this stage...there is no possibility of extraditing Saadi, because ultimately what needs to be applied is international conventions," he said.

Saadi's exact whereabouts in Niamey have not been disclosed.

The international police agency Interpol issued an alert on Thursday calling for the arrest of a second son of the ousted Libyan leader, putting pressure on Niger to detain Saadi Gaddafi who fled to neighbouring Niger three weeks ago.

Interpol said it had also issued an alert for Saadi Gaddafi, who is accused of leading military units responsible for crackdowns on protests and of misappropriating property.

Niger has maintained that it does not want to extradite Saadi to a country where he would not be given a fair trial and risked the death penalty.

Niger was for years propped up by the oil-fuelled largesse of Muammar Gaddafi in everything from agriculture to tourism, but also distrusted Gaddafi and at times suspected his hand behind its troubles in the north.