GUINEA WILL FALL IN ABUJA - IDEYE 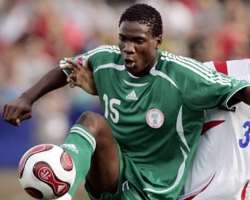 Brown Ideye
Dynamo Kiev striker, Brown Ideye, says the Super Eagles are favourites to clinch an automatic ticket to next year's African Nations Cup despite the team finding themselves in a crucial position ahead of their final Group B game against leaders Guinea next month.

The Eagles are second in Group B with 10 points, three behind the Syli Nationale and must win with at least a two-goal margin to qualify automatically for the tournament scheduled for Equatorial Guinea and Gabon.

The former Sochaux striker had been sidelined from the national team since last year's friendly game against Korea Republic but he returned recently to the team, featuring in the 3-1 defeat to Argentina in another friendly game in Bangladesh.

'All eyes are on us to qualify for the 2012 Nations Cup, and I am very sure that we will beat Guinea in Abuja,' Ideye said.

'Every African-born player wants to play at the Nations Cup because of the reputation of the competition. If we beat Guinea we will go to the tournament as favourites, which we've always been.'

Despite the defeat to Argentina, Ideye hailed the Nigeria Football Federation for organising the world-class friendly match for the team.

'We can always get better. The Argentina game was a good one for us despite the defeat. I was excited playing the game and making a return to the team but my ambition is to be part of the team and help them win the 2012 Nations Cup after qualifying in October.'