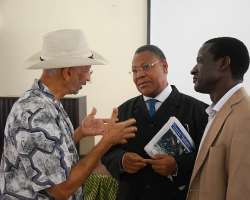 Agriculture is one of Nigeria's most powerful tools in addressing its goals of creating more employment, better public health, and greater economic growth, says Hartmann, Director General of the Ibadan-based International Institute of Tropical Agriculture.

In his presentation titled “Forging an economic transformation: the role of agricultural research and productivity” at the monthly lecture series of the National Institute of Social and Economic Research (NISER) in Ibadan, Hartmann said the transformation of agriculture would stimulate small- and medium-sized industries that are in fact the engine of economic growth.

The need to focus on agriculture stems from the fact that the sector accounts for 70 percent of the people in the rural areas, the growing demand for food and, more importantly, the about 44 percent contribution of agriculture to Nigeria's Gross Domestic Product.

Hartmann said that achieving economic transformation would require more investments in agricultural research and development and the development of infrastructure. He also said that Nigeria needs to build its defense against biological threats to crops just as is being done for the military.

He noted that agriculture in Nigeria in recent decades has been a neglected sector, adding that gains have been constrained by weak institutions and inadequate infrastructure.

“These constraints are well known. Less known are the limited application of technologies, the low skill base in the sector, and its aging population. The young are fleeing rural areas and the production side of the sector. Similarly, financial institutions view the agricultural sector as risky and so it receives a very small portion of commercial credit,” he said.

According to him, getting the young interested in agriculture and developing a supportive financial system to facilitate the access of farmers, traders, and processors to credit could go a long way in addressing several national needs.

He described the agricultural setting in Nigeria as 'dynamic,' explaining that the problems/challenges facing agriculture could be turned to profits.

For instance, the postharvest losses in Nigeria could be turned around with more processing of what farmers harvest.

In addition, the Director General called on Nigeria to depend less on development partners, to move from comparative agricultural production to competitive production, to improve human capital, and to tap into the vast human resources available—the youths— for development.

The Director General of NISER, Prof. Olufemi Taiwo, said the lecture was timely, considering the government's efforts in repositioning agriculture as a prime mover for Nigeria's growth and development.

Taiwo, who was represented by Prof. Femi Olokesusi, said that the transformation of agriculture would bring many benefits to the country. Such benefits could include the reduction in the level of unemployment and conservation of foreign exchange, among others.