I lost an actor in a hectic shooting – Chico Ejiro 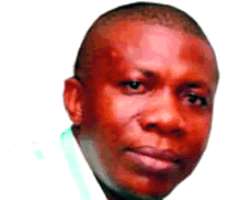 He is popularly called Mr.Prolific having produced well over fifty movies and many soap operas which are currently running on air. Chico Ejiro, the soft-spoken father of two from Delta State spoke to http://nollywoodgists.com recently and bared his mind on issues facing the movie industry, the effect of the economic meltdown and why sexual harassment has become a norm in Nollywood.

Background
My name is Chico Ejiro, I am from Ozoro in Isoko Local Government area of Delta State. I got married to my hearthrob Joy in May, 1998. Having spent almost six to eight years in Ilorin as a student, a lot of people believed I am an indigene of Kwara State. I attended Obafemi Awolowo University, Ile-Ife where I obtained a Diploma in Agriculture after two years before moving to Federal University of Agriculture, Umudike to complete my course in Agriculture.

I have been involved in movie production since my university days. At that time, I produced Ripples, the popular soap opera on the Nigerian Television Authority(NTA) and Mega fortunes which I did alongside my elder brother, Zeb Ejiro, Ralph Nwadike, Tunji Bamishigbin and Charles Owoyemi. Afterwards I moved into home video production popularly known as Nollywood, where I co-produced Tears For Love and Deadly Affair with my partner, Opa Williams before settling down to produce my own movies, Obssession and Silent Night. I have produced close to sixty movies and directed over a hundred under my establishment, Grandtouch Pictures Limited.

Crossing From Agriculture To Movie Production
I say to people that life is a divine gift from God almighty. At times, you decide on what you want to do but God has other plans for you. I had interest in entertainment when I was a kid because my mother always took my elder brother, Zeb and I to the theatre to watch movies. From there, I always thought of how to be in the motion picture sector. At a point, I became a production assistant with NTA during my university days and after my youth service in 1990, I got fully into the movie industry.

Between Stage Drama and Motion Picture
It is a pity that indigenous plays are no longer the in-thing like it was ten years ago when great plays like Ola Rotimi's The Gods are not to Blame and Wole Soyinka's Death and the King's Horseman were watched and enjoyed on stage. The reason is that actors have abandoned stage drama for Nollywood because they were not paid well considering the amount of time they put into rehearsals when compared to their counterparts in Nollywood who do little or no rehearsals. Most people believe that stage actors are the best because their job is spontaneous as they pass messages across to the audience instantly without repeating scenes as it is done in Nollywood.

But the problem is that stage actors are not accorded the same treatment by the society. Home video actors are regarded as the stars while stage actors are relegated to the background hence, they moved over to Nollywood to gain recognition and earn better renumeration like their Nollywood counterparts. But I believe that if more theatres are built and are given utmost priority in Nigeria, stage drama would return to its former glory.

Challenges as a producer
The structure of Nollywood and its organization are the major challenges confronting me. Any industry that doesn't have a proper structure cannot grow well. The entire entertainment industry needs an overhaul that will involve proper planning and not the normal Jankara or Alaba International market mentality with which it is being run.

Problems facing Nollywood
The first problem in Nollywood is poor organizational and marketing strategy. Another problem is finance.There is no financial support whatsoever from the government. In developed countries, there are entertainment funds that enable movie producers apply for funds for movie projects. For instance, after the Second World war, most of the war films always portray America as the super power because Americans were never defeated in any war. It is a propaganda thing and that is why the world fears America but we know in the real sense, that is not completely so.

The American government has succeeded in using movies to pass a message across to the world. The case is not so here because the success of Nollywood is hinged on individuals who just invest their money and creative ideas into the business to make things work without any support from the government. Another problem is piracy. All our films are being pirated and little effort is being done to check it. Even if policemen arrest offenders they will run away. Last year, a police van was burnt by suspected pirates and nothing happened. We were also chased with cutlass when we confronted them.

Meltdown and Nollywood
The meltdown has affected every aspect of life not only in Nigeria but also all over the world. These days, the number of movies being released into the market is very low compared to what we used to have. It is wrong for me to invest money on a movie and at the end of the day, I won't even market it well. In a country of a hundred and fifty million people, it is difficult to sell a hundred thousand copies of movies.

My challenging movies
There are many of them but I will mention a few. The first one is Full Moon because it is an adventurous movie that moved cast and crew to five states. From Lagos to Ogun state, to Osun state, Ogbunike cave in Enugu and then to Jos, the Plateau State capital. This was because I wanted to achieve an effect with mountains, waterfalls and caves in the movie. Another challenging work was Festival Of Fire which was shot in ajungle of Aba in Abia state featuring Regina Askia and Saint Obi. Slave was also quite challenging because it was shot in the jungle of Abakaliki and I lost one of the actors there because it was a very hectic production.

Role Models
Jesus is my role model, but there are also people who have imparted a lot of things into my life. My elder brother, Zeb Ejiro who taught me the rudiments of the job, my wife who has been so supportive and my mother who gave me so much as a child. My friends Obi Osotule and Fidelis Duker also inspire me to forge ahead.

Sex for roles
Virtually every sector has had its share of sexual harassment, so Nollywood is not different. The truth is that most of the actresses spreading this rumour are not good enough and are trying to give the industry a bad name. Consider Liz Benson, Genevieve Nnaji, Omotola Jalade Ekeinde and other top actresses, none of these would agree to sex for roles because they are good. Infact, some of these desperate girls suggest it to the producer not to spend so much on the good actresses but suggest they can do anything to get lead roles and the man succumbs because he is only human and blood flows through his veins.

Africa Magic And Nollywood
It entirely depends on the producer. If you decide that your movie is worth two million dollars or five million dollars, it is entirely your decision and the quality, content and resourses you put into making the movie will determine the price that would be paid for it. It is not by force, if you feel that your movie is being under-priced, you have every right to say I am not selling. I also believe that African Magic has helped Nollywood in terms of creating awareness in Africa and all over the world. Our actors and actresses are the most respected in Africa.

Rita Dominic visited Malawi recently and was welcomed by over 20,000 fans.It is a two way thing, some people argue that it is not good for the industry while others say that the industry needs the publicity. It depends on the way one looks at it. You cannot expect the amount paid for Jeta Amata's Amazing Grace to be the same amount to a producer without pedigree.

Awards
Yes, I have won awards both in Nigeria and abroad. I won the Black film festival award in Geneva, Switzerland in 2002 and in 2004, I won another award in Washington DC, America and also in South Africa.

Professionalism in Nollywood
First, mediocrity thrives in Nollywood. Some actors and actresses don't take the pain to learn the art of acting, they just gate crash and make a mess of the industry. In the same vein, Some producers just produce movies with outdated cameras and constitute a nuisance with poor audio and visual quality. A lot of people just jump into it. The issue should be squarely addressed by the various guilds in the industry and with time, I believe that there will be a proper setting for the professionals to thrive. A proper Actors Guild that could monitor the level, the background and the professional qualification of actors and actresses coming into the industry should be put in place.

Current Programmes
Presently, I run a lot of television programmes including Forever and Treasures on various television stations in Nigeria. I am also working on a reality show entitled Superstars. It is about raising a complete entertainer, a complete artiste who can sing, dance and act. It will be on air in the next two months. I also want to shoot two movies entitled Pay Girls and Runs For Life. While the former is about rich ladies without husbands who believe their wealth can get them husbands, the latter is a story about jobless ladies who are only interested in getting the good things in life without working, they are the party freaks, people who wake up and have no particular place in mind to go but move from one man to another. It is a hot game now in Lagos and the movie seeks to educate the society that a life like that does not pay and ladies should desist from it.

Relaxation
Most of my friends know that I am the chairman of Arsenal football club. I relax by watching Arsenal play anytime and even production, we don't miss it, we continue production after the match ends. It has become a tradition for us