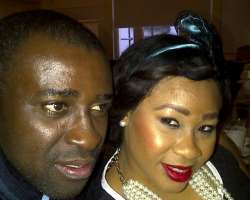 News filtering in revealed that popular presenter of must watch programme, Who Wants To Be A Millioniare, Frank Edoho plans to marry new girlfriend Sandra in December 2011.

Insiders squealed that Sandra was the shoulder the Who Wants To Be A Millionaire Presenter leaned on when trouble rocked his home.

Further findings revealed that Frank became embroiled with Sandra after the initial celebrated break up with Katherine that was hurriedly patched up.

Sandra is described as a trade shuffler between London and Nigeria.

She is further identified as a mother of one- a girl.

We shall keep you posted as events unfold

MORE FRANK EDOHO FINALLY OPENS UP ON HIS SEPARATION FROM HIS WIFE.