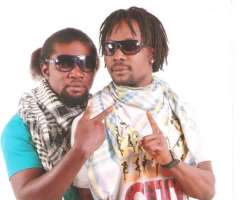 Last Friday (12th June, 2009) at Expo Hall of Eko Hotel, Mad Melon and Mountain Black better known as Danfo Driver, performed track from their new album: Meshango and other hit track .The crowd that thronged out massively to add color to the event produced by Bunmi Davies for the acclaim King of Comedy, Ali baba AGAIN HE THEM & I . The two (2) days event is believed to be Ali Baba last stand up comedy performance.

It will be recalled that Ali Baba gradually built himself into a brand because he employed several method to gain acceptance in the corporate world, erecting billboard in strategic places in Lagos, placing of advert in Newspaper as well as thank you messages to client who had supported his growth through the just ended.

The crowd fell in love with the song which confirmed what Danfo Driver group is known for. Danfo Driver came on stage after command performance by some Comedians of The Federal Republic; Seyi Law,Mc Shakara,Helen Paul, Princess and other fellow artiste like Bracket(Yori yori exponent), Sound Sultan.

Danfo Driver eventually dazzled the audience with kpolongo and Meshango. Ali baba who was overwhelmed with what he saw, showered encomiums on the duo, he taught they lost their street credibility because they been out of scene for sometime. It is good to bounce back were the words from the duo themselves.