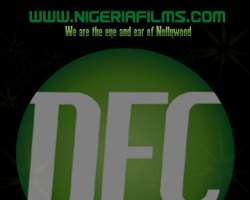 In November 2007, the National Council on Information and Communications (NCIC) received a joint memorandum from the Nigerian Film Corporation (NFC) and the Independent Television Producers Association of Nigeria (ITPAN).

The main thrust of the memorandum is the need to regulate the airing of foreign programmes on local television channels between 6 p.m. and 10 p.m. A period considered as prime time.

That is the period some Mexican soap operas like “The Gardener's Daughter” and “When You are Mine” are running on private television stations with a huge audience, mostly youths and women.

It is obvious that the foreign soap operas have overshadowed national network news which came on NTA at the same time.Local producers also view the thrust of the memorandum as salutary, believing that it can revive the dwindling interest in the nation's local films and videos.

Since the submission of that memorandum, however, not much has been heard of it. Even the communique published at the end of that NCIC meeting, conspicuously left out the issue.

But, in December 2008, the Director-General of the National Broadcasting Commission (NBC), Mr Yomi Bolarinwa, directed broadcast stations in the country to stop foreign programmes on local television channels at prime time.Bolarinwa's directive was to come into effect on April 1, 2009.

The DG of the NBC says that the new regulation on local content is occasioned by the commission's worry on the influx of foreign television programmes. He adds that this is capable of promoting unacceptable foreign culture, violence and other vices.

The acceptable standard for Nigerian local content, as spelt out in the Nigerian Broadcasting Code, provides that: “unless there is a strong editorial justification, programmes and advertisements during the family belt shall be devoid of sex or overt sexual behaviour; nudity, violence (verbal or physical); bloodletting, smoking and alcohol”.

The code also lists drug abuse; denigration of womanhood; offensive, lewd and vulgar language, expression and presentation; exorcism, occult practices and the paranormal (which purports to be real).

The Commission believes that the regulation on local content will go a long way in supporting indigenous productions, a view shared by many industry stakeholders.

Nkem Owoh, a Nollywood actor, popularly known as Osuofia, sees the new regulation as a challenge to Nigerian film producers. He says: ``The film industry can assist in the “Rebrand Nigeria” campaign because it has gained acceptability all over the world. There is no perfect avenue to re-brand Nigeria other than through locally produced movies”.

Mr Joseph Hundah, Managing Director of Multichoice Nigeria -- an international private television station based in South Africa -- says his company is well disposed to local content in programmes and has invested over N15 billion in that direction.

”About N15 billion has been invested on Nigeria content via our premium channel providers -- M-Net and Super Sport, including productions such as “Doctors Quarters”, ”Edge of Paradise” 1 & 2, ''Tinsel” and “Idols West Africa”, Hundah said.

He explained at a meeting with Information and Communications Minister, Prof Dora Akunyili, that the company is also investing in additional Nigerian channels, including those exclusively run in Hausa and Yoruba languages.

Are local television stations willing to invest time and money in providing quality programmes in line with NBC's new regulation which became effective on April 1?

Mr Afolabi Adesanya, Managing Director of Nigeria Film Corporation (NFC) says it is the duty of government and broadcast stations to support local production of programmes.

``The NFC and the Independent Television Producers Association of Nigeria (ITPAN), actually presented that memorandum in 2007 at the NCIC and we are happy that today, the NBC is running with it.

``We have a very rich heritage of quality production which has impacted positively on Nigerians”, Adesanya explains.

Adesanya argues that special funding is required to sustain the tempo of production of local programmes.

``What we need to do really, is for television broadcast stations to commission editors who would engage and fund Nigerian producers.
`` That is the only way that we can stimulate and sustain local TV programming just like what the CBN did for the banking sector”, he says.
Mr Emeka Mba, the Director-General of the Nigeria Film and Video Censors Board, says Nigerian producers have the capacity to flow with the new regulation.

``I know that there will be issue of costs. Some stations will prefer to buy Mexican soap operas for 200 dollars as against doing a local episode in Nigeria, which will cost you twenty times that amount,” Mba adds.

As local television stations begin to implement the new regulations on local programming at prime time, it is important to ensure that producers feed television viewers with programmes that promote cultural values, traditions and national identity.

The new measures will not only save the nation's movie industry from collapse, it will inculcate indigenous culture in the youths and reduce the effect of the current wave of cultural imperialism from the West. (NANFeatures)