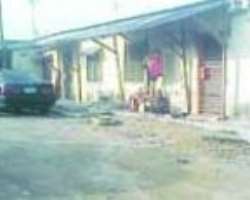 By any standard, sultry Nollywood actress, Ann Njemanze, is a star. Right from her debut role in the popular Igbo language movie, entitled Rattle Snake, it was obvious that this beautiful young woman was destined for the top.

Like a script for a fairy tale movie, Ann's already rising fame soared to high heavens when she walked down the aisle and exchanged marital vows with fellow actor and bad boy of Nollywwod, Segun Arinze.

While it lasted, the wedding was the talk of the town in the Nigerian movie world. Sure enough, it was a marriage of two stars, or better still, a fairy tale marriage made in heaven.

However, beyond the fame and stardom, Ann cannot be said to have been favoured in other aspects of her career and life. For instance, while her marriage was a total failure, she definitely has not earned enough dough to live the life befitting her status as a movie star.
Her marriage, just like it started, soon came crashing like cookies, packing up barely few months after. At the time, Arinze explained the crash of his marriage as “It just didn't work, and I have moved on”; Ann on her own believed her marriage failed because she was too young at the time. “This was a young girl coming out of school. She found fame and everything started happening.”
Indeed things were happening for young Ann at the beginning, making all around her believe she was in the class of women who would make it big within a short period of time.

The first daughter in a family of six from the royal family of Njemanze of Owerri, Imo State, the foundation for Ann's future in the movie industry was laid early when, on the prodding of her parents, she dropped her first choice course, law for a diploma in Theatre Arts at the University of Port Harcourt. Soon, she had her first break when she starred in her first movie, entitled: Rattle Snake. More successes came when she featured in the now-rested popular TV series, Checkmate.

In an old interview with a national newspaper, Ann described her love for the tube as something she had always had. “I was just a TV person. Everything I wanted to be was attached to television and that was what I told my father, and he just gave me his blessings. And all I have come from the fact that I am associated with television.”

True to her words, Ann seemed made for television. Not even a serious accident sometimes ago could dampen her love for the make-belief life of an actress. Her fame soared to high heavens she starred in a popular movie, entitled “Domitilla”. Aside from fame, she also took something away from the movie, a name that has remained stuck till date, Domitilla.

With that, Ann assumed a status that guaranteed her seeming passport to wealth and fame, with an ever growing list of fans and admirers. Truly, the fame she has in lorry loads, making her a gold fish a gold fish everywhere she goes.

A true picture of an entertainment star can be captured in the lifestyle and living standard of the artist. For instance, he or she must have a lifestyle that depicts luxury or opulence with a good accommodation, luxury cars and exotic dresses and visits to choice restaurants.
Ann's proficiency in the acting profession has never been in doubt. Since her emergence on the screen, she has remained an all-round artist with an admirable on-the-screen mien. She endeared herself to her numerous fans with A-list performances in movies like Domotilla, Forever, True Confession and Hot Secret among several other hit movies.

However, aside from her famous face on television, Ann has definitely not signed a better pact with success. As a growing child, Ann was often fascinated by the likes of Bonny M, Ruth Benamasia and Barbara Soky among others. “As a child growing up, television was a fascination for me, seeing the likes of Abba, Bonny M, and I remember Ruth Benamaisa, and Barbara Soky. I was like, whatever it is, I want to be on television.”

Unfortunately for Ann, however, unlike her television heroines and other notable Nollywood stars that live in choice homes, ride exotic cars and carved a niche for themselves with their enviable lifestyles, Ann's star's status has remained restricted to a clumsy two-bedroom apartment in a little-known part of Lagos and an everyday tortuous ride in taxis and okadas.

Unlike the choice homes of other movie stars in exclusive locations, investigations by National Life has revealed that, Ann currently lives with her two children, Remi, the girl she had for Arinze and her younger brother, Akachi (also known as Mohammed) and a maid in a two-room apartment in the Onike area, a marshy suburb in Lagos.

Ann's non-descript home, which obviously has never enjoyed any layer of paint, is located in the marshy end of Ibeno Close. To get there, you'll need to navigate your way through other streets like Ayato Street and Gbeto Street, which themselves are off the main Iwaya Road.
The large compound itself is devoid of any symbol that may suggest that a movie star lives there. With rough, unpaved and unkempt floor,

Ann's compound could be mistaken for a local mechanic workshop by a first time visitor.
On this day, two generators (I better pass my neighbour) rested lazily by the entrance to Ann's apartment while two other vehicles, one looking disused, were parked few distance away.

True enough, Ann's closest neighbours are the mechanics. Behind her rustic and tiny window are rolls of cars waiting to be fixed. Once in a while, the noise from the workshop has caused frictions between the actress and her neighbours.

Ann is not only famous for her roles in movies. She is equally a famous customer of the neighbourhood motorcycle (Okada) commercial riders and the taxi drivers. However, sometimes when the okadas and taxis are not forthcoming, a situation National Life gathered is common, she employs the services of her legs to cover the almost 400meters distance from her home to the main road.

'Unfit' as her home seems given her status, Ann's colleagues in the industry still find it attractive enough to visit. National LIFE gathered that fellow popular artists visit her

A resident of the area who also doubles as a die-hard fan of the sultry actress lamented her present state. “The first time I saw her here about three years ago, I didn't believe it was indeed my screen heroine. The sun was up and I saw her walked down the street clutching her bag, sweating profusely. I still don't know what went wrong.”

It is this same question several of her fans and admirers are battling to find answer to. The answer was provided by Ann herself in a recent interview when she said: “Segun (her former husband) never supported my daughter. He has never taken care of my kid. That's why I said when you're dealing with a man, deal with a wise one.” The import of her statement is that she has been solely responsible for the upkeep of her daughter.

It seems Ann has not really been lucky with her men. While she has been deserted to cater for her daughter by a former husband, she was also left in the cold during her trying period by a former boyfriend. “During those two years, I really thank God that I have a mother who is very strong. You know, I wanted to just forget everything. The boyfriend I was dating at that time, left. He left me after the accident. He just took a walk, I didn't believe it. It was horrible and that's just putting it lightly.”

Perhaps, the more reason why Ann is yet to live the lifestyle befitting of a star was the accident which almost put paid to her acting career. To get back on her feet caused her a fortune.

However, to those who know Ann well enough, these experiences are minor setbacks that would later serve as springboards for her to bounce back and attain the class she truly belongs to in life.