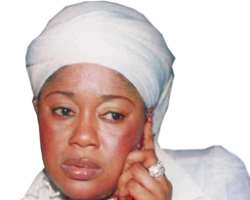 Tayo Odueke is back. Tell her detractors that her sojourn in Oshodi is not enough reason for her hard earned reputation as a top-flight actress to be forgotten by producers and marketers who are bent on shutting her out of Nollywood. She is back and better. Thank you.”
Before you drag me into another face-off with the Lords of Lagos and the rulers of our parks, let me denounce the authorship of the above paragraph. It was actually a text I got from God-know-where as I was hurrying to close this page with my powerful editor waiting impatiently to prevent me from sabotaging him. The number it came through read 08051583557.

When I got the text, my initial reaction was to ignore it, given the recent outburst that followed a piece I wrote on the romance between Sikiratu Sindodo, as Tayo is widely known, and Musiliu Akinsanya, a.k.a MC Oluomo of the NURTW. My brother, they nearly banned me from boarding Molue anywhere in Lagos. While the embargo lasted, I was saved by the ingenuity of Governor Fashola. But for the BRT, which came to my aid, the ongoing fuel scarcity, which put my car off the road for a while, would have exposed me to the wrath of the boys.

So you can now see why I chose to ignore the text. But on a second thought, I changed my mind. 'I better do as they say,' I told myself. Why? Because I am not sure where the message came from. What if it is from my 'friends' who now want to give me an opportunity to prove that I have nothing against their darling damsel? So I read through the text again.

First and foremost, I welcome Tayo Odueke back to the industry and joined her fans in telling the producers to look beyond her Oshodi sojourn and give her roles. Secondly, I am glad she is not too shaken by the events of the last few months between her and Oluomo. But I must add that she must reduce the way she is sulking over the matter to whoever cares to listen. Remember a song by Ebenezer Obey, that says eni ri nkan e…, apologies to my non Yoruba readers.

To the author of the text, I thank you for the opportunity to be good boy but why not see if you can also help mend Sindodo's broken heart. Or you don't think she is sad over this Oluomo matter? Anyway, her friends said she used and dumped the NURTW big spender. Nothing spoil, life goes on. Welcome back o jare Alhaja alarafa mi.