Salamatu Mohammed a shinning movie star from the North 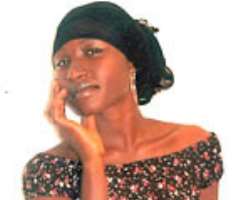 She's an upcoming movie star in the North, Salamatu Mohammed. Friends call her Sally. Born in 1985 in Kaduna, but originally from Borno state. She attended the Federal College of Education in Zaria but could not complete her studies because of her love for acting. She joined a movie school in Kaduna called Video Waves and acted in some films which made her popular in town. There is also another movie to her credit, though yet to be released, where she acted as a daughter of popular Kannywood star, Hauwa Maina.

She said she has passion for acting and thought most girls from the far North find it difficult to explore their talent in the acting world due to religious or cultural inhibition. She is different as the sky would be her limit since her family had allowed her to go after what she loves doing.

“I believe acting is just part of me, it is what I can do, even if I am not paid, I will still be happy doing it,” she said.

Salamatu said she was inspired by top Nollywood actresses such as Genevieve and Stephanie Okereke, who she had never met, but hopes to be like them someday. From the Hollywood stable, she said Angelina Jolie fascinates her a lot.

Coming to the Kannywood stuff, Sally said she liked their films, though she doesn't get to watch them as much. She believes the Kannywood stars have talent and they are good.

”The future of the film industry in the North is bright and we are growing, but there is room for improvement,” she said.

Sally, who loves dancing, swimming and cooking, is still single and hopes to get a role in the film, Queen Amina , currently been shot in the North. To those who watched some of her performances, the 25-year-old is a great delight any day and has already given the promise of a great future in the movie industry.