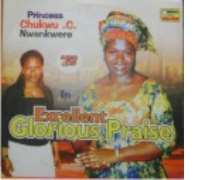 The album titled "Excellent Glorious Praise," comprises 15 tracks of complete praise songs, done mainly in Igbo language with a touch of Hausa Yoruba and, of course, English-languages. This, according to the artiste, is to cater for those who do not understand the Igbo language. "I had to use other languages so that others will benefit from the message being passed across," she said.

The 15-track audio musical which was only produced by her husband can be a substitute for actual prayers. "It's all gospels throughout and when listening to it it's like you are praying," she said.

Mrs Nwankwere, who hails from Umuogele Ntigha, in Isialangwa North Local Government Area of Abia State, said she started her singing career in 1995, but that she never knew she had the talent for music ,"until one of my aunties called me to join their band called the Catholic Biblical Movement (CBM). That was how I started singing." She added that unknown to her, her voice was actually attracting people to her song whenever she sang.

"The first song I did was as a result of my voice. It was my voice which captivated the Manager of Spotlet music when I sang a song at a programme in Aba. Thereafter, he said to me: "You are good at fixing some things into songs." He then introduced me to CC Best, a well known music producer, where I sang my first song 'aka mara mma' (praise to praise), she said.

She said her inspiration comes from God in dreams, prayers and through reading the Bible.

She said her new album is “one that” is strongly recommended for Christians who do not or sometimes don't have time for actual prayers. However, non-Christians can also enjoy it since the rhythm and lyrics are good composition."