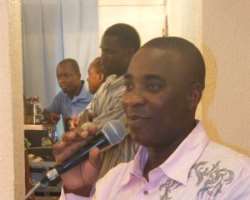 Fuji King Wasiu Omogbolahan Adewale Anifowoshe a.k.a KI the Ultimate turned 52 on Tuesday 3 March, 2009. He spoke with http://nollywoodgists.com about his life at 52, fuji music and other issues

Q: Congratulations as you turned 52 today!
A: Thank you.
Q: What did you do this morning when you woke up?
A: I prayed to God for sparing my life, I have been praying since. Apart from that, different Islamic prayer groups have been coming to offer one prayer or the other.

Q: Looking back at Wasiu Ayinde Mashal that started as a parker with Sikiru Ayinde Barrister, how do you feel?

Q: At 52, what is your aspiration for fuju music?
A: I want fuji music to wax stronger and Almighty God has answered my prayers as fuji artistes are moving higher and higher. We also see lots of younger ones coming up. I know that Almighty God has raised me to encourage other players in the industry and music in general. When I look back at what God has done for me and others, I hold my head and thank my God. Though those who came before me tried their best to move the music up, when I came on board, I asked my God for transformation which He did.

Q: Before Tala 84, you did some albums that were not commercial success. What was on your mind when you recorded Tala 84?

A: No, I never had a dull album even before Tala 84. Before then, I had been growing musically from one stage to the other. There has never been a dull moment as far as my stardom is concerned and today, I see the hand of God In the past, my road to stardom. Then, I was just doing my thing from Agarau area of Lagos State to South-West, to Nigeria, Africa and international.

Q: No doubt, Tala 84 shot you to limelight. So, what was your expectation during the recording of the album?

A: Well my prayer then was that I want to be seen as the greatest. So, I put more effort during the rehearsals and recording of the album with prayers. Thank God it became a hit.

Q: There was a rupture in fuji kingdom recently, so many things happened then!

A: There was never a rupture in fuji kingdom. For example, people find it difficult to believe that a black man will rise from nowhere to become president of the United States of America. Definitely, there will be some grumbling, so also is the fuji kingdom. There has never been any rupture. Let's consider my experience that spans over 30 years. Definitely, I am not just a starter, despite the fact that we have the older ones there; I am duly recognized and honoured.

Today, we sit and laugh over the so called rupture. Leadership is not a thing one just allocates to himself, you must first ask yourself what it takes to be a leader. By and large, I thank the Almighty God that I am still very 'rooted' and 'mounted', that is the most important thing. I am still in control.

Q: Why is every stage of your development controversial?

A: I am not controversial. There has never be a controversial moment in my life. But controversy is another better form of pronouncement because when you are moving up, people will have something to say about you. I have others before me and I am not doing anything extraordinary except that I am just doing things my own way. One thing is that, it is very good for you to understand the politics of anything you are doing. I am still in control of the politics erupting in the music circle, Nigeria and the world at large. I know how best to handle situations.

Q: At 52, do you now slow down on a lot of things?
A: No! I won't slow down, the age is the mind.
Q: Do you ever think of retiring from music one day and going into other vocations like politics?

A: No! I am everywhere, be it music, politics and otherwise.

A: I have gained a lot in music. What we the artistes have lost is the market itself because pirates have feasted on our materials, not in Nigeria alone but in other parts of the world. We are not losing to piracy alone, also to the system. That is why it is easy for one person to download music from laptop in his or her room. Left for that, we have lost nothing.