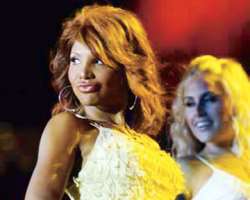 American singer Toni Braxton did not make it to Nigeria for the Valentine Pink Ball that held in Abuja and Lagos last weekend.

The 41 year-old R&B star was to give a performance alongside some Nigerian acts at the ThisDay Dome and MUSON Centre in Abuja and Lagos respectively. But sources close to the organisers, Leaders and Company, told us Nigerian stars Darey Art Alade and Asa had to be called in when Braxton could not make the trip.

“I think she was ill'', said a source close to the organisers. And it wasn't something that was planned for. So last minute plans had to be made.”

The Abuja show did not hold as advertised.
The MC, Frank Edoho, told guests, at the Lagos event on Vals' day that Miss Braxton could not make it because she was Ill.

“The organisers explained why she was inadvertently absent. She's going to come in at a later date, and the tickets would still be valid.”