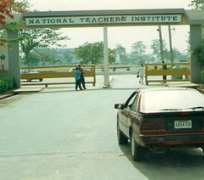 Director-General and Chief Executive of National Teachers' Institute, NTI, Dr. Aminu Ladan Sharahu, has described the allegations against him as frivolous, even as he declared that those behind the petition are envious of the feat his administration has achieved.

Speaking to Daily Sun in Kaduna recently, on the allegation of maladministration against him by one Yushau Mohammed, on behalf of the staff of the Institute, Sharahu, who initially was reluctant in granting audience to our reporter, since according to him, the author of the petition does not exist in NTI, noted that in any academic environment, people should be bold to challenge any system they feel does not work, rather than hide under anonymity to create unnecessary distractions.

Although he claimed that he has a good working relationship with his predecessor, Dr. Moddibo Ahmed, Executive Secretary, Universal Basic Education Commission, UBEC, Daily Sun can authoritatively reveal that the strained relationship between them, occasioned by certain changes, carried out by Sharahu, may have given rise to the series of petitions against the incumbent DG of the Institute, which many see as a money spinner.

For instance, Daily Sun's investigations reveal that while it is true that one Hajiya Zainab Aliyu, represents the Registrar during Council meetings, the practice was inherited from Ahmed, as he too allegedly by-passed the substantive registrar, who is now sick, because they were not in good terms, and instead worked directly with the deputy registrar. It is this deputy registrar that is now been allegedly sidelined by the incumbent DG.

Again, further investigations revealed that all the security personnel and cleaners operating in the Institute were provided by a company allegedly owned by Ahmed's wife. Although, the incumbent DG did not tamper with that arrangement, the company however no longer handles the feeding of participants and others guests during occasions.

But when asked if he had any problem with his predecessor, Sharahu denied and insisted that all was well between them. Asked further if he had attempted to or had dismantled any structure put in place in the Institute by his predecessor, he said nothing of such had happened.

He responded to some of the issues raised against him in the petition, saying: 'Ordinarily, as someone who is in the academics, I should not be seen responding to anonymous petition, because in the university where I come from, if we are challenging a system, we come out in the open to do it, we don't hide under anonymity.

'Again, I must confess, and I want to thank you for that, that you are the first and the only journalist that has so far approached us to hear our own side of the story over this matter since it began. Others just sat in their offices, and were just writing stories without making any attempt to hear from me. If I sue them, do they have any document to back up their claims?

'The truth is that some people are just envious of the feat we have achieved in just one year. Things that have not been done in 35 years, we have done them in just one year. In case you don't know, we have brought the Institute to the status of that of tertiary institutions, which has led to increase in salary of our staff in 2010. And this was even backdated; to the extent that majority of the staff were praying for me. I did not benefit from the increase.

'Is it wrong to change the pattern of doing things? Our stakeholders were complaining about standards, marking- wise, and based on that, we decided to bring experts to moderate it. The records are there, let them (petitioners) come out and testify.

On the trip to China, the records are there. The Minister gave the approval. But there was a shift in date. And even at that, when we eventually embarked on the trip, there was no minister in place, but the chairman of the Council approved it. So I got a double approval for the trip.

'Only recently, I got 1,000 computers free of charge from an International donor, HP pentium 4, we have got the first batch of 500, we have distributed it and now we are waiting the delivery of the second set.

And the type of system we run here is such that since I came in, every year, we hold congregational meeting, where we give everybody the opportunity to pour out his/her mind on the running of the place. The meeting is such that you can say anything under the sun about our management style, yet nobody will hold it against you.

And once any observation is made, if you come for the next meeting and you did not notice any change concerning whatever observation made, you can challenge us on it. When the present minister came on board the first time, we were challenged to reposition the NTI. So in my response to the minister recently when some of these allegations were raised, I told the minister that 'you directed us to reposition the NTI, we set out to do it, but people are not happy because we are stepping on toes.'