'MIRROR BOY' WHO WILL STOP THE MOVING TRAIN 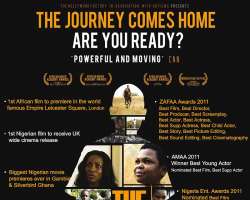 Like a moving train, 'Mirror Boy' records strings of achievements everywhere it went. In London it was the first African movie to premiere at the prestigious Empire Leicester Square which earned it tons of praise and achievements and placed the Nigerian movie industry on the world stage. In Ghana, 'Mirror Boy' reigned so well to become the highest selling movie ever in the Ghanaian cinemas. Now, only in the first week at the Nigerian Cinemas, Mirror Boy has made over N12 million in sales.

Earning such an amount would not come as a surprise, as the movie since its grand premiere at the Silverbird Galleria on August 5, 2011, has garnered a lot of praise from the movie industry stake holders and movie lovers in general.

When asked to comment on the success of the Mirror Boy, producer Obi Emelonye said, 'I am extremely glad. It is my desire that 'Mirror Boy' success in Nigeria surpasses the movie's earlier successes because this is the homecoming of the movie. With 'Mirror Boy' I think we can further show the world that Nigeria is capable of making good movies'.

The film which was written, produced and directed by Obi Emelonye, is made up of a multi talented cast with the likes of Nigerian Genevieve Nnaji and Osita Iheme, The Gambia's Fatima Jabbe, and Uganda's Edward Kagutuzi. The movie revolves around the life of a 12 year old London born African boy Tijani who get sent back to his country of origin by his mother when he is involved in a street fight. Things take a dramatic turn when he gets lost in a crowded market in The Gambia after he witnesses an apparition in the mirror which leads him on a journey of self discovery through the forest and later re-emerges with a greater appreciation for his homeland and a better understanding of the relationship he has with the father he never met.