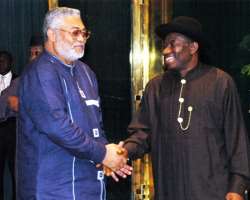 ABUJA, August 12, (THEWILL) - President Goodluck Ebele Jonathan has expressed concern at the famine in Somalia, and pledged that Nigeria and the Economic Community of West African States, ECOWAS, would make appropriate responses at the forthcoming pledging conference in Addis Ababa, Ethiopia, on August 25, 2011.

President Jonathan was speaking when former Ghanaian President, Jerry John Rawlings, African Union High Representative for Somalia, came to brief him on the situation in Somalia, and seek a response to the conference.

He said the, “famine in the Horn of Africa is worrisome, and African leaders must take action to help this unfortunate situation”, adding that ECOWAS would discuss the matter during its next meetings of the Ministerial Council and of the Authority of the Heads of State and Government, next month.

President Jonathan agreed with former President Rawlings that African leaders must show a commitment to helping the people of Somalia at this most critical time.

Earlier, the former Ghanaian leader, President Jerry Rawlings, had said the Somalia situation was a catastrophe that had to be remedied through concerted action by African leaders and corporate organisations.

He stated that the Chairman of the African Union, President Obiang Nguema Mbassogo of Equatorial Guinea, expected political and corporate leaders in the continent to show a commitment to seeking a solution to this problem.

“I cannot be calling on the international community without showing that the African leaders are also trying to assist their own brothers. That is what brought me here. This is an opportunity to demonstrate that we are capable of helping ourselves in Africa”, he said.

The AU High Representative said August 15, 2011 would be declared Somalia Day, while a Pledging Conference on Somalia was being planned for Addis Ababa, Ethiopia on August 25, 2011.